This two-headed ray was discovered in an aquarium in Australia earlier this year.

It was found by a researcher who was checking up on a group of female rays in early April. Some of the females had given birth and among the babies he spotted what he describes as an "oddly shaped, pale object".

On closer inspection he found it was a stillborn ray — and it had two heads.

The ray was discovered by Leonardo Guida, who is a doctoral student at Monash University in Melbourne. He says it's the first two-headed specimen of either a ray or shark found in Australia, and only one of a handful encountered worldwide.

Guida says the cause of the ray's rare birth defect hasn't been established. Such an abnormality could arise through a genetic defect, or when an embryo begins to divide to form twins, but the process isn't completed. Environmental stressors such as pollution may also cause problems in development. 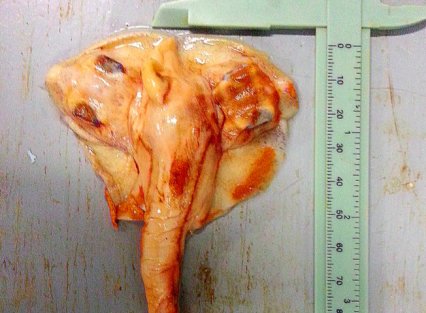 The stillborn ray is a specimen of Southern fiddler ray (Trygonorrhina dumerilii). The females in the aquarium had been hand caught by researchers in Swan Bay, a section of Port Phillip Bay south of Melbourne. The females were in the latter stages of pregnancy, as confirmed by ultrasound. The area in which they were caught has heavy shipping traffic and recent work on shipping channels has resulted in polluted sediment becoming re-suspended in the water, but it's unclear whether pollution played a part in the ray's birth defect.

The world's first Two-headed bull shark was found in April 2011 in the Gulf of Mexico, but there was no evidence to suggest this abnormality was linked to the Deepwater Horizon oil spill either.

The study on the ray by Guida and co-authors is published in the journal Marine and Freshwater Research.