A seven-year-old goldfish called Roger has made history after he was the first in Britain to receive microsurgery to remove a growth from his face.

Roger is a firm favourite with pupils at Mont Nicolle Primary School in St Brelade, Jersey, so teachers became concerned when he started to develop what appeared to be a tumour over the summer holidays — the picture below shows Roger before his op. 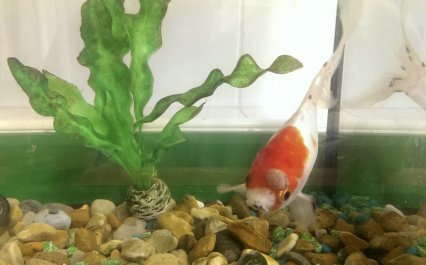 The growth rapidly got bigger and staff feared the worst.

But local vet Jeremy Miller, from All Pets Veterinary Surgery in Jersey, had seen reports of a ground-breaking operation on a goldfish called George, in Australia, which PFK covered earlier this year — and offered to try something similar.

The operation was a success and Roger was apparently swimming about and eating minutes after the surgery was completed.

Roger — named after tennis star Roger Federer — has since made a full recovery and is swimming about in the aquarium at the school, much to the delight of the pupils.