Great White sharks may spend most of their time hunting for prey in the world's oceans, but thanks to a new iPhone app you can keep track of some of them without needing to even get your toes wet.

The new app, launched by the California based Marine Conservation Science Institute (MCSI) cost almost $100,000 to produce, and is described as the first of its kind, allowing users to track the 12 Great Whites currently carrying active tags as they go about their lives in the Pacific.

It also includes video content and a game for children to learn more about the endangered sharks.

The MCSI has tagged over 20 sharks with the tracking devices, which can upload data to the app via satellite. 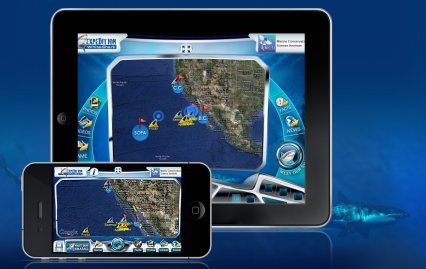 Concerns that the app may be used by hunters to catch the sharks have been dismissed by the MCSI's Michael Domeier, who says the app will not give precise locations as the sharks are constantly moving and the tag only sends new data when the shark is on the surface for more than three minutes.

Domeier said that despite its fame, very little is known about the species, and while Pacific populations are thought to number in the thousands, exact numbers are still unknown and while it had been thought that they spent much of their time feeding off seals and porpoises just off the coast, the tags had shown they actually spent much of their lives out in the ocean with no one knowing what they do while they are there.

The app, which is currently only available for the iPhone costs $3.99 and is available from iTunes with all profits going to the MCSI.

The MCSI organisation was founded on the belief that focused research can make a difference in how we view and manage our marine resources and is committed to promoting important issues in marine biology and fisheries. It is currently involved in research projects around the globe dedicated to protecting and conserving marine resources.