These fish have all been caught using cyanide! A project aimed at curbing the deadly practice of cyanide fishing has been launched today (July 1) by the UK-based Sea Life centre network.

Though illegal in most countries, the use of cyanide to catch live fish for both the ornamental and food markets is still widespread in parts of East Asia.

Now, for the first time, a test developed by a Portugese University research team has made it possible to find out if a fish has been exposed to cyanide without having to kill and dissect the fish first.

The 40-plus strong network of Sea Life centres around the globe begins random testing of newly acquired fish stocks from today, in a bid to staunch this cruel and destructive trade. 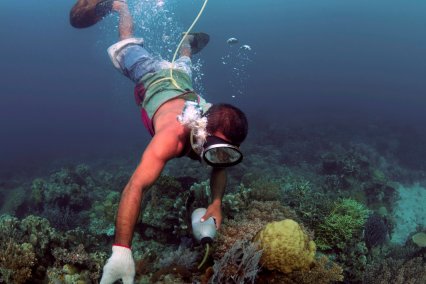 "Fishermen squirt the poison into the corals to stun fish, enabling them to make quicker, bigger and more lucrative catches, even though most of the fish caught will often be dead by the time they reach port," he added.

The test developed by Dr Ricardo Calado at Portugal’s University of Aveiro, involves transferring a fish into artificial seawater, leaving it long enough to pass waste, and then sampling the water for a specific by-product of cyanide.

"A positive result will tell us if the fish has been exposed to the poison, which might mean it was caught using cyanide but may simply mean it was taken from an area where the poison has been used by others," said Chris.

"Either way, it will enable our suppliers to track the delivery back to source and identify the holding facility they were first housed at.

"Everyone we work with wants to stamp out this evil practice and already polices the supply chains vigorously, but without having a representative on every single tiny fishing boat it has been impossible until now to be sure that cyanide has not been involved.

"For the end purchaser, a cyanide-caught fish can appear perfectly healthy, and then die mysteriously days or weeks later."

Chris, who is based at Sea Life’s main collection breeding centre in Weymouth, Dorset, was shocked by the extent of the problem when he travelled to China earlier this year in search of sustainable supply sources for the Sea Life chain.

"In some coastal collection centres I saw tanks full of newly-delivered reef fish which the fishermen who landed them freely admitted they had caught using cyanide," he said. The fishermen who caught the fish pictured at the top of the page and delivered them to a holding facility on Hainan Island, China, told Chris they had all been caught with cyanide.

In spite of being the world’s largest aquarium chain, Sea Life’s own import of wild-caught fish amounts to less than 0.003% of the global catch, most of which goes to the hobbyist market.

"Because many of the same original collection points and wholesalers are involved, however, we believe our project will help clean up supply lines for everybody," said Chris.

"In the first six months we will report positive tests to our suppliers in confidence, to give them the opportunity to take action to ensure there is no repetition.

"If we get further cases from the same supplier and we’re not satisfied enough is being done to identify and sanction the culprits, we will simply drop them," he added. 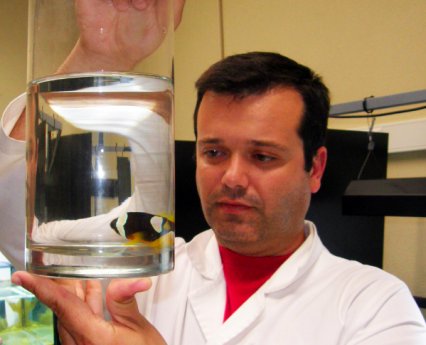 Samples currently have to be sent to Portugal for testing, but Dr Calado (pictured above) and his team are working on a simple 'field-test', which will enable checks to be made in any location.

The test was developed using clownfish, and may still need fine-tuning to be equally effective for all species, but the samples from Sea Life will help Dr Calado’s team apply any necessary refinements as they are processed.

"Once the formula is perfected for all species we will urge other aquarium operators to follow suit," said Chris, "and with everyone on board we think we can start to stem the supply of cyanide-caught fish to the ornamental trade."

Perhaps even more alarming however is the little-publicised trade in cyanide-caught fish for the live food market.

Some estimates place the quantity of live fish supplied to this market per annum at around 35,000 tons, with Hong Kong restaurants and food markets accounting for 60% of the total.

"Most authorities confirm that cyanide is used frequently to cater for this demand," said Chris, "but it is doubtful that consumers realise they are being willfully dosed with cyanide."

Chris and Dr Calado are both hopeful that the impact of the new test for aquarium fish will raise awareness of the 'food fish' problem and force health authorities in the affected regions to act to stem that trade too.

"There is also a considerable health risk to the fishermen themselves," said Chris, "I have heard of boys as young as 11 and 12 equipped with bottles full of  poison and hopelessly inadequate protection from getting dosed themselves.

"In contrast, there are also many fishermen who use sustainable methods and do their best to actively protect reefs, and it is these practices we want to support and encourage."