The real cost of gold - your hobby! The real cost of gold - your hobby!

Nathan Hill explains how man's thirst for gold is affecting the environment - and could lead to the loss of many of the fish we keep. Take a look at the video below to see how bad the problem is becoming.

There are many things that we can harp on about as affecting the planet. Climate change, for example. It’s pretty much universally accepted that the environment is changing, some places are defrosting, while in others people are experiencing the kinds of weather you’d expect straight out of some biblical, earth-manifest perdition.

It seems that for some folks, being slapped in the face with mounting evidence just isn’t enough. Unless they see something direct and in front of them, something measurable and obvious, they’ll not accept that things are going wrong.

Cue gold mining and fishkeeping. Many of us are blissfully aware that the trinkets swinging from our necks, or caressing our wedded fingers are doing harm to the planet, but they are, and it’s impacting us as a hobby.

We’ve got a visual representation of just how harmful gold mining is. The Peruvian journalist Guido Lombardi, who has taken to the skies to show the extent of the damage, has recently brought the devastation wrought by this mining in to light and shows us just how bad things are (scroll down for video).

I can talk figures, but that won’t help much. I could say that the expansion rate of illegal mining operations after 2008 is almost 6,200 hectares a year, but those are just numbers on a screen. What it takes is a good glimpse of what is really going on, to see just how much of an impact to the wilderness such operations have. 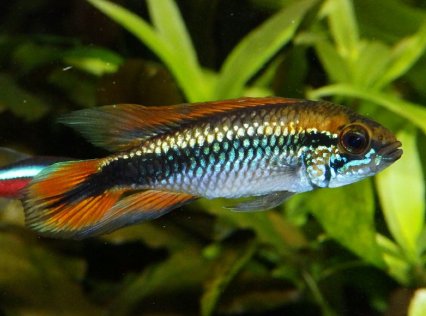 Don’t think for an instant that South American gold mining is in any way akin to coal mining in the UK. We’re not talking people tucked away underground in hard hats and pulling ore out of the ground. Rather, we’re looking at using rivers to wash down huge tracts of land through sluices, mixing it all with mercury and sifting out the shiny stuff. And then all of that mercurial slurry just washes back out downriver and destroys everything it touches.

We as fishkeepers are not responsible for this. But it is going to impact our hobby, and our global home if it continues. Many fish come from Peru that we will know. There are numerous Corydoras cats, Apistogramma, and not to mention the endless selections of tetra. As things are, we can expect to say goodbye to some of them if such madness for minerals continues.

That’s not to say we should hate the miners, and take to the streets demanding an immediate NATO airstrike on all involved. Most of the workers involved will be peasants desperate to make an income for their families, in a country where inequality is rife, and the welfare system inadequate. Work or starve is a common phenomenon in South America, so let’s please hold back from foaming comments about how everyone working there should die painfully.

What can we as an industry do? Well, from here not a lot. But we can make small inroads. Not so long ago I reported on the work of Project Piaba, and how it creates a sustainable income for the people in regions in Brazil. It’s high time we had a Peru equivalent, a way of collecting and exporting renewable fish resources so that the indigenous population appreciate that when they have is better as a long term investment rather than a short term one.

In the meantime, do please have a look at the video below. It’s not a pretty sight, and the commentary is not in English, but you’ll soon get the gist of just how big a problem illegal gold mining is becoming. I for one would happily support any sustainable fish export that started to come out of the country if it helped alleviate this, and I’d like to think that others would to.