The King of Dwarves gets a name! It's a fish that's had cichlid fans salivating since it first appeared on the scene, and now it has a name of its own. Nathan Hill investigates the largest Apistogramma there is.

Ichthyological surveys in remote regions are prone to turning up some real treats, even if we usually have to wait a while to hear about them. For me, discoveries like those of Hernan Lopez-Fernandez result in all my work getting dropped and scientific papers getting pored through like they hold the inner secrets of the universe itself.

So we have good reason to be excited that 'The Pipe Expedition' went to survey the Brazilian Serra do Cachimbo back in October 2007, and turned up a whole host of enticing fish in doing so. This particular excursion, consisting of field explorers Jose Luis Birindelli, Leandro Melo de Sousa, Andre Netto Ferreira, Mark Sabaj Perez, and Nathan Lujan, saw a team heading out in to the field for 18 days, during which they used a mixture of gill-net, seine-net, cast-net, dip-net, and hook and line fishing to catch samples, their work often taking them out at night.

One particularly striking cichlid, hauled up on the 29th of that month, turned out to be the largest Apistogramma species ever found. It’s a brightly coloured cur of a thing, which cichlid fans will probably do backflips to get hold of.

Originally, this fish was given a couple of tentative informal names, with ichthyologists Birindelli et al. calling it Apistogramma 'gigas', while Mark Sabaj Perez opted to go for the more classic Apistogramma sp.

Now, further work by Mark Sabaj Perez and Henrique Varella has resulted in the fish finally receiving (some seven years after its initial discovery), an official name: Apistgramma kullanderi, a tip of the hat to famed Swedish incthyologist Sven O. Kullander, who has probably done more work for neotropical cichlids than any other scientist.

You can see the paper, aptly titled 'A titan among dwarfs: Apistogramma kullanderi, new species (Teleostei: Cichlidae)' if you fancy a closer look, though I’ll sum up some of the key points below. Plus there are some tantalising ideas regarding the role that species isolation has played in the gigantism of the fish.

Apistgramma kullanderi’s most obvious feature is its size. By dwarf cichlid standards, it’s a leviathan, spanning 79.7mm. Bearing in mind that fish in the genus Apistogramma represent the smallest examples of neotropical cichlids, with the greatest number of species under just 36mm and 50mm respectively, this marks A. kullanderi as over double many of its close kin.

Observing images of A. kullanderi feels like looking at some kind of indigenous marine fish, with the vibrant head stripes screaming Cuckoo wrasse.

It’s only the males that display these intense markings, with females drabber and smaller, hinting that female sexual selection may be having some influence on the males’ superior sizes.

Males, which were suspected as caught during their spawning dress, are described as: "ground color yellow-green on head, nape, breast, and uppermost flank (above pectoral-fin base and along dorsal fin base), transitioning to shades of aqua- blue ventrally and posteriorly to caudal peduncle; bluish hues most evident in regions occupied by dark vertical bars. Dark markings on head and body black, strongly contrasted with lighter ground color. In holotype, magenta wash completely covers snout and dark pre- and interorbital stripes. Magenta coloration also on portions of jaws and skin between jaws and snout, irregularly on nape and scales along dorsal fin base, on distal portions of dorsal and anal fins (particularly on prolonged soft portions of those fins), and throughout caudal fin." For a lay reader, most of that translates to 'very attractive markings'’. 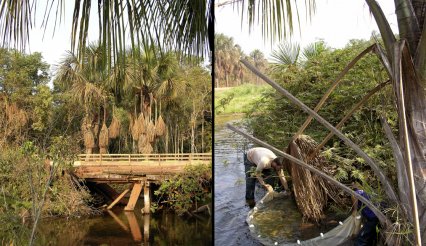 As interesting as its markings, are the fish’s biogeography and distribution. So far, Apistogramma kullanderi is "known only from the upper rio Curua and two of its larger tributaries on Serra do Cachimbo."

What’s so exciting about that is that this region (slightly similar to the region in the Lopez-Fernandez feature linked earlier) is found at a kind of biological isolation. Serro do Cachimbo is an isolated plateau of the Brazilian Shield, and is as high as 500m above sea level. Here, waters from the Xingu (in the form of rio Curua) and from the Tapajos (as rio Jamancim and rio Teles) all reside.

At lower regions of the rio Curua, beneath the uppermost of three waterfalls, A. kullanderi simply is not found. Instead, at the higher elevations, where the water is described as 'clear to mild blackwaters', the fish has been found in slow and shallow backwaters under the shade of vegetation along the banks.

Being higher up, A. kullanderi is out of reach of many of the 'usual suspect' predators, who would struggle to navigate up a waterfall — as we all might. Given that one of these falls is 60m, while the others are 40m and 10m respectively, you can see why even a determined predator might struggle.

In absence of predators, evolution can become whimsical, and if food allows, males can grow larger and larger, encouraged by eager females who are interested in spawning with the biggest, strongest and biologically fittest of males.

But there are other influences. Where A. kullanderi lives, there are two other species of cichlid present. The first is a smaller species of Apistogramma, A. 'upper Curua'; while the second is an Aequidens species, A. aff. rondoni.

It’s speculative, but it could also be the case that A. kullanderi’s size has grown to give it an advantage over A. 'upper Curua', while the bigger A. aff. rondoni has kept it in check from getting too carried away.

For those fancying a stab at a biotope for the fish, I have this to say: you’ll struggle to be exact. From the upper Curua, five other species have been found to be endemic (all characins) including: Leporinus guttatus, Jupiaba kurua, Moenkhausia petymbuaba, Lebiasina marilynae and Lebiasina melanoguttata. Unless you’re well connected, you won’t be seeing those in a hurry.

If you were aiming (very) loose communitope, other fishes from the surrounding regions include the likes of Aphyocharax species, Thayeria species, and some ever ubiquitous Moenkhausia species (Red eyed tetra). Then, aside some Charicidium species, there are lots of other, big characins of no suitability.

As for catfish, rio Curua houses the attractive Centromochlus schultzi woodcat, and amongst the wealth of Loricariids in the region, Ancistrus might be an option (though they are found in rio Teles instead).

Aside the discovery of A. kullanderi, The Pipe Expedition eventually managed to stumble across almost 250 different species of fish, with 86 catfish being discovered, and a remarkable 35 of those are considered new to science.

The expedition was carried out under funding from the All Catfish Species Inventory project, and you can find more information on The Pipe Expedition (including a gallery of many of the other fish found) on the website.