Heiko Bleher reports on an environmental disaster in the Amazon region that he says is far worse than we have been led to believe.

The latest news on the BBC and in other media shows dramatic pictures and videos of the greatest Amazon River disaster in history – not just since 1963, as mentioned in some reports.

There are millions of freshwater fish dead – probably billions. Just a few years back I watched over two billion catfishes, members of all 10 known Amazon catfish families, during a spawning migration in the Tefé region, on a river stretch of less than 25km, which is dried up now.

This year's disaster sees hundreds of thousands of native people sitting on dry land, without access to drinking water and no fish to eat. Over 20 million people in the Brazilian Amazon depend on this protein. They can hardly move with their canoes. Almost every major boat is sitting on dry land – some have spent over two months on the river ground as the largest tributaries like the Madeira, Purus, and Juruá are nearly dry. 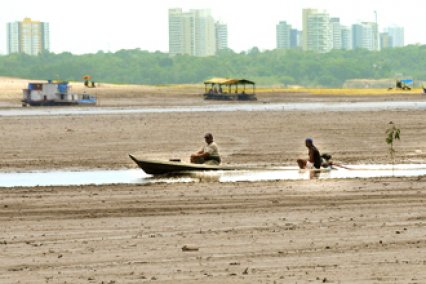 At the lower Rio Negro, the largest freshwater river in the world, one can walk across it.  The thousands of recreios, the only transport method to move people and supplies to the most remote areas, are sitting on dry land.

Almost every village in the Amazon, except those on the central Amazon-bed, are cut off from the outside world. Ornamental fish collectors can hardly find fishes as most have disappeared or are dying of weakness, due to a lack of food. This, and the tremendous oxygen depletion, will kill most of the remaining ones if no rain comes within the next few days – and this should have started already. 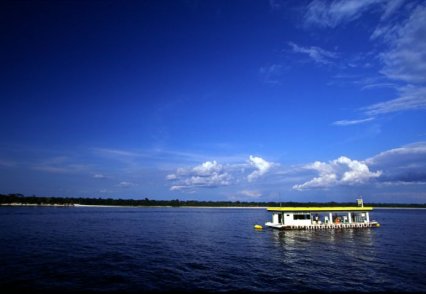 A picture from Manaus, taken when PFK visited in 2003, before the waters receded.

Billions of fish larvae hatching at this time will die and many species could become extinct, including some we will never know about.

As an example of what we are losing: only during the last 10 years 687 new fish species have been discovered and described in the Amazon basin (73 Gymnotiformes, 70 Trichomicteridae, 260 Characidae, 174 Loricariidae, 26 Callichthyidae, 23 Pimelodidae, 15 Doradidae, 11 Auchenipteridae, 15 Hepapteridae and 20 Cetopsidae) not even WWF has registered these fish numbers on their latest Amazon report. How many are we losing among those millions, possibly billions, of dead fish we have been shown? How much of the biodiversity?

Why are we having this unbelievable disaster, this dryness? The media claims El Nino, CO2, the continuous deforestation in the Amazon and other regions. The fact is that global warming has, from what I have seen during the last decade while doing research in aquatic habitats around the globe, increased by at least tenfold and I think that global warming is 100 times worse than what we are told.

And it's not just the Amazon River...

I just came back from India doing research in 50 larger lakes in the Northwest – not a single one of these had one drop of water - but on today's Google satellite maps they do (the photographs date from 2003, I found out...)

China's gigantic Yellow River has lost over 30% of its water level in the last 10 years. The high plateau of Tibet, and The Pamirs, the Top of the World is turning into desert land, as has already happened in Central Asia, where the fourth largest freshwater lake on earth, the Aral with 148 extinct fish species, has dried up completely.

The largest freshwater lake of West Africa, Lac Faguibine with 60 endemic species, became history - including its 40 Cichlidae species that no one ever saw alive.

From 10 rivers I recently researched in Angola only three had water, the others long dry. The centre of Australia has never been as dry since records began; the Sahara is moving nearly 50 km south yearly; the Gobi and Karakum deserts are expanding as never before. Should I go on? I visited all these places (and many more) during the last four decades and all had plenty of water with freshwater species living in them.

Where will it end?

While Ahmed Djoghlaf, the Executive Secretary on the Convention on Biological Diversity, gave a historical talk on November 1, 2010 - on the occasion of the 65th Session of the United Nations General Assembly - saying that Nagoya (where the convention took place) entered in history as the birthplace of a new era of living in harmony with nature, the Amazon is being erased faster than ever before.

I drove just recently 2500 km through Mato Grosso, seeing only soya from horizon to horizon - when I had crossed it during my childhood with my mother, it was full of rivers and creeks and the thickest primary rainforest on earth.

In addition, Brazil's outgoing President gave the green light for 100 hydroelectric dams to be build in Amazonia – Belo Monte on the Xingu is the only one mentioned in the media. Is this the harmony with nature we are looking for? Besides that, once all is gone these hydroelectric dams will stop functioning - like the Balbina dam near Manaus, the biggest and first environmental disaster in Amazonia, because after they had destroyed an area in the size of Luxemburg, there was no more water...

With all of these facts, can there be still anyone still asking why we are having this environmental disaster in the Amazon?

I hope that Man wakes up before it is really too late...

Breed your aquarium fish and take care of them!