The force is strong in baby corals at Horniman Scientists at the Horniman Museum and Gardens in South London have settled newly spawned baby corals onto Star Wars models, and found they ‘prefer’ characters from the good side of the Force, to the dark side!

The coral ‘recruits’ — the scientific name for coral larvae that have grown big enough to be seen with the naked eye — have settled more densely on models of the Millennium Falcon, R2D2 and C3PO, than on models of Darth Vader, the Death Star and an AT-AT Walker.
C3PO proved the most popular, so perhaps ‘coral’ is among the six million forms of communication he’s fluent in.

Most corals shunned Darth Vader, apart from a rogue one (or two) that have settled on his mouth, perhaps in an attempt to silence that ominous breathing. And while the Millennium Falcon proved very attractive to the corals, the Death Star didn't seem such a good prospect — maybe they've had a peak at the plans? 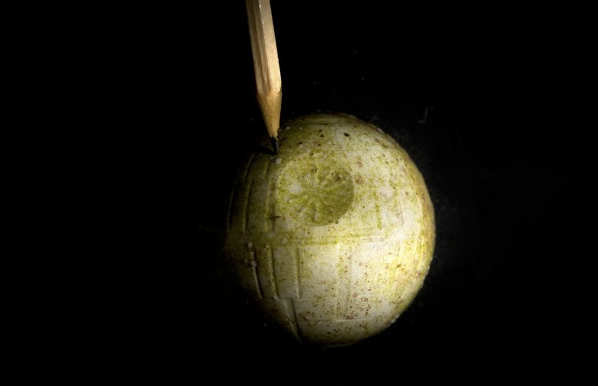 The Death Star model has just a few corals growing on it, indicated by the pencil.

The models are made of a special concrete-type mix, set into ice cube moulds, and then conditioned with an algae that gives a biological cue to the coral larvae to settle.

Aquarium Keeper Jamie Craggs, says: ‘Whenever we want larvae to settle and grow into new coral specimens, we need to provide them with a hard, textured surface. My two sons had these moulds at home, and I couldn’t resist using them and seeing which ones the corals settled on. Obviously I’m delighted our baby corals haven’t all gone to the dark side. Alongside our other, rather more scientifically rigorous, successes to date, this is good news for Project Coral.’

The spawning and settling is part of the Horniman’s Project Coral research, which is investigating captive coral reproduction to help preserve wild coral reefs for future generations.