The Amazon River in crisis, 'fish dying by the millions' Where has all the water gone? Explorer Heiko Bleher has just returned from an expedition to the Amazon River - or what's left of it. He says unless there's a miracle and rains come early, the millions of fish deaths in the rapidly drying river could become billions.

I returned on September 20th, 2012 from the Rio Solimões (the name of the Amazon River between the Colombian border and Manaus, where the Rio Negro joins) and the upper Amazon.

For two weeks I travelled extensively up and down river and encountered the Amazon/Solimões as dry as never before during my 400+ Amazon trips. And it’s only the middle of the dry season — there are still around two more months without (or with hardly any) rainfall.

Will this disaster be even worse than the last one I reported?

While I was travelling with my dear guide and friend Stefen, a Tikuna-Indian, and two companions, the American writer Emily Korn and the Polish aquarist Michel Babinski, in a boat equipped with a 40HP outboard, I witnessed this sadness everywhere. 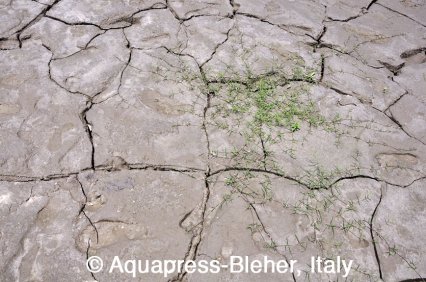 The native people have to walk for miles across sand areas to reach the remaining riverbed, as the Paranás (channels) were all dry and not passable any more. Huge sand-islands had emerged from the deep – the water level has dropped over 20m from its original level since the beginning of July. In many places grass was growing over it. 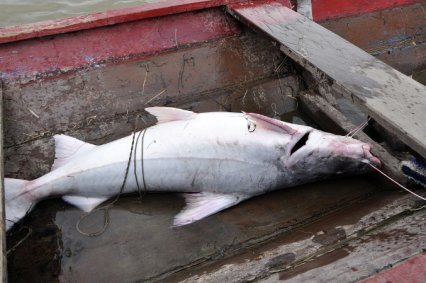 Fishermen were catching an amazing quantity of fishes everywhere. These included giant catfishes of the genus Brachyplatystoma, their bellies nearly exploding due to the quantity of fish they had swallowed (see above). 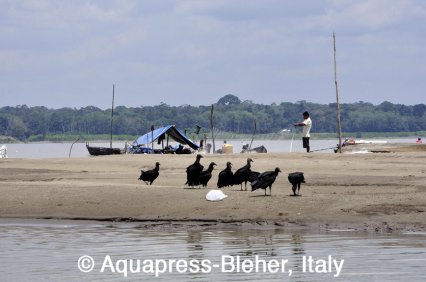 Other fishes were dying by the millions and being eaten by the 'Police' of the Amazon — Urubu, the American black vulture (Coragyps atratus brasiliensis).

Other fishes were trying at least to save their offspring, with gigantic spawning migrations upriver. We followed some of them, like Triportheus and Raphiodon species, while trying to reach the headwater lakes.

The largest group of all, which we followed for about 50 km non-stop, was a migration of millions of Prochilodus nigricans (pictured above). There were so many that they jumped out of the water in gigantic masses, one over the other to move ahead and possibly to get to the spawning ground before it was too late. They measured between 25-38cm/10-15” and as long as we were running the boat they jumped left and right — hundreds of them right into our boat — non-stop for hours. Even when we camped alongside the left bank of the Solimões, their migration lasted all night long.

We camped that night, climbing high up the river bank to place our tents and hammocks, after getting stuck in the middle of the Solimões.

Our small wooden boat with a few inches of draft got stuck in this mighty river, the largest and longest in the world with (formerly) over 22% of the freshwater of this planet, now nearly dry. In its middle course we had 25cm/10” (25 cm) to work with…and we had to push our boat. 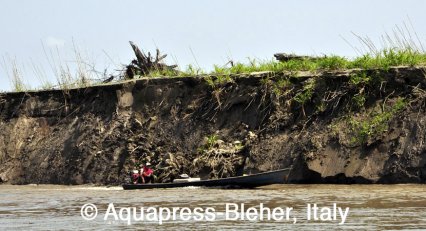 None of the large boats were able to move further up the Solimões than São Paulo de Olivença, because of this incredible dryness.

What will happen next? If there isn’t a miracle and rain comes unexpectedly, billions of fishes will die…

I am not a visionary of climate changes and I will not be the one who says climate change is due to deforestation or whatever, but for sure this planet is losing more and more of the most precious of all of our goods: freshwater.

Maybe it is a cycle of Planet Earth, maybe it is man-made, but freshwater fishes are disappearing at an incredible rate in nature — surely as never before, and not only due to climate change.

The deforestation world-wide, the endless pollution of most (if not all) of our worldwide freshwater habitats and the poison and pesticides entering most rivers and lakes — not to mention dams and destruction of riverbeds for construction purposes — is worse than ever.

And things have never been as drastic as today...