Surgeonfish may be key to healing Tubbataha atolls Surgeonfish may be what the Tubbataha Reefs need to regenerate after parts were destroyed by two foreign vessels this year.

An expert has said that two atolls in Tubbataha may heal in 30 to 40 years, after suffering damage from the groundings of a US Navy minesweeper in January and a Chinese fishing boat in April, thanks to the presence of surgeonfish, also known as labahita.

Gregg Yan, communications manager of WWF-Philippines, praised the fish, saying: "Perpetually browsing on algae, forever ignored because of their dull colours, these little lawn mowers are the secret to Tubbataha's recovery."

Al Licuanan, a coral scientist, proposed the regeneration of the damaged atolls after a recent dive to Tubbataha by a team of researchers and environmentalists, according to WWF-Philippines.

Licuanan credited surgeonfish as the key, due to their constant grazing of algae. This therefore stops seaweed from taking over the exposed rock, allowing coral to settle and flourish.

He led the team of researchers, park rangers and environmentalists from the Tubbataha Management Office (TMO), the Department of Science and Technology, WWF-Philippines, the University of the Philippines Marine Science Institute, and De La Salle University to assess the damage caused by the groundings. 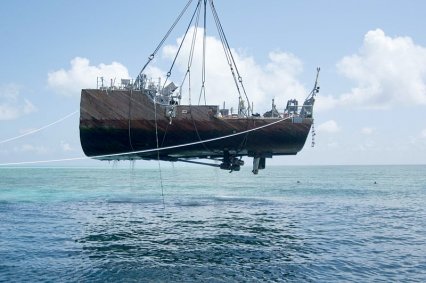 On 8 April, a large fishing vessel from China, carrying 12 suspected poachers, got stuck on an atoll in Tubbataha, consequently destroying almost 4,000 square metres of coral. A number of huge 500-year-old Porites corals were cut in half, said WWF-Philippines.

Three months earlier, the minesweeper USS Guardian landed on another atoll in Tubbataha in January.

The warship had to be dismantled piece by piece to save further damage to the reef, to 2,345 square metres were destroyed.

The Tubbataha Reefs Natural Park is in the centre of the Sulu Sea and protects almost 100,000 hectares of marine-habitats made up of three atolls and a large area of deep sea.

Tubbataha is home to cetaceans, sharks, turtles and Napolean wrasse, as well as more than 350 species of coral and 500 species of fish. It is a World Heritage Site, as declared by the United Nations Educational, Scientific and Cultural Organisation (UNESCO). 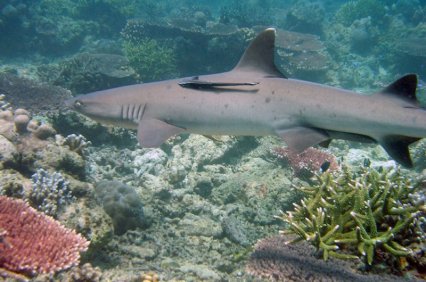 WWF-Philippines Yan said Tubbataha is the "undisputed jewel of the Coral Triangle," an area comprising parts of the tropical waters of the Philippines, Indonesia, Malaysia, Paua New Guinea, the Solomon Islands and Timor-Leste.

It is home to 30 per cent of the world's coral reefs, 75 per cent of coral species and lost 3,000 species of fish, according to TMO.

They said: "Ocean currents carry larvae from the Coral Triangle to other parts of the world, suppling the globe with marine resources.

"It is the geographic centre of the global marine biodiversity and an international priority for conservation."

About 85 per cent of the reefs in the Coral Triangle are in decline, with the most reef degradation in the Philippines, according to a recent study from the World Resources Institute.

As of 2010, only one per cent of Philippine reefs are in excellent condition, whilst around 40 per cent are in poor condition, the Department of Environment and Natural Resources said.