The National Marine Aquarium hosted the Making Waves auction this week which saw Plymouth's very own sculpture trail of sunfish statues go under the hammer.

Compered by BBC Radio Devon presenter, David Fitzgerald, the auction raised a whopping £12,890, which will be used to support marine conservation programmes.

Fourteen of the sunfish statues — that have been on display at key sites around Plymouth since March — went under the hammer. The highest bid of the night was a very generous £2,750, while one keen bidder, Richard Larson snapped up four statues. The fifteenth statue, sponsored by the National Marine Aquarium, 'Beneath the Surface' was included in a raffle — and it proved to be Richard Larson’s lucky night as he was drawn as the proud new owner.

The funds raised from the Making Waves auction will now be used to support marine conservation programmes, including the Ocean Sunfish project being led by the National Marine Aquarium. Sunfish are susceptible to commercial fishing, plastic pollution and global warming; however it is currently unknown to what extent. The funds will allow the Aquarium to investigate changes to the world’s oceans and the consequential effects this will have on marine life.

The Making Waves trail featured a series of sunfish statues, designed by Plymouth City Council Apprentices. Each statue features individual artwork created by the Making Waves Artists, who were selected by the statue sponsors, which include Brittany Ferries, Plymouth University, National Apprenticeship Service and Theatre Royal Plymouth.The picture below shows Richard Larson with the 'Plymouth Hoe' statue and the artist, Louise Rabey. 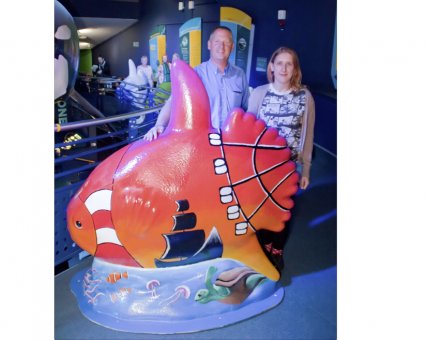