Ichthyologists from USA and Indonesia have described a stunningly colourful ricefish species from freshwater habitats in a small island near Sulawesi.

Publishing the description of Oryzias woworae in a recent issue of the journal Copeia, Lynne Parenti and Renny Hadiaty distinguish it from congeners by its remarkable colour pattern of a steel blue body (in males), highlighted with brilliant red stripes on its abdomen, pectoral fins and caudal fins.

In addition to its colour pattern, its truncate caudal fin and an hourglass-shaped ossified portion of the mesethmoid that is without any cartilage on its midlateral margins additionally distinguish it. 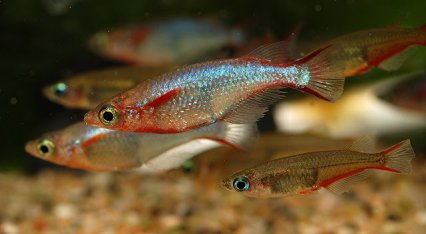 Oryzias woworae, named after Indonesian crustacean expert Daisy Wowor (who collected the fish), was collected from a freshwater stream with a canopy cover of about 80 percent and substrate of mud and sand with leaf litter from Muna Island, off the southeastern coast of Sulawesi.

The pH of the water was 6–7, and the fish were caught schooling with a Nomorhamphus halfbeak.