A new species of Geophagus has been described, which is endemic to the rio AripuanÃ£ drainage in the Amazon basin of Brazil.

Geophagus mirabilis can be distinguished from all other species of the genus by the presence of two to six large black spots arranged longitudinally along the middle of the flank, in addition to the black midlateral spot that is characteristic of species in the genus and by a pattern of iridescent spots and lines on the head in living specimens.

The fish has been named in reference to its patterning: mirabilis means 'extraordinary' or 'admirable' in latin. 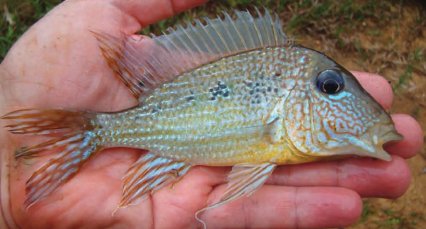 Geophagus mirabilis is restricted to a long stretch of the rio Aripuanã basin from right above the Dardanelos/Andorinhas falls to many kilometres upstream, and it is the only species in the genus that occurs upstream from the falls.