Stranded Whale shark was tied up as a tourist attraction A stranded Whale shark was tied by its tail to a post with a rope, so that visitors could see and touch it.

A fisherman was paid by a resident of Boljoon, Philippines to tie up the 3m shark after it became caught in fishing nets and dragged into shallow waters near Barangay Granada.

Photos of people touching and riding the unfortunate fish spread all over the Internet after they were posted on Facebook.

"The children were jumping around in the water touching the whale shark all over its body," she told the Sun Star, adding it was like a "fiesta" (feast).

Village councillors were even taking photos of the shark. 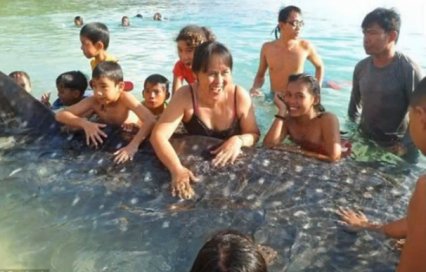 Avenido ordered the fisherman to set the shark free, but he refused, saying that a local lady had paid him 100 pesos (around £1.50) for the fish to be tied and that she was waiting for some visitors to get there so they could see and touch it.

Eventually her visitors arrived and had their photos taken with the Whale shark. At that point Ms Avenido threatened to call the police and it was only then that the fish was freed.

She said that the animal already had wounds on its tail and face and added that it was probably too stressed and disoriented to comfortably swim to deeper water. With this in mind she asked some of the fishermen to guide the shark out to sea and into the depths away from the curious crowd. It's thought that the Whale shark's ordeal lasted at least two and half hours.

BFAR officer-in-charge Josefina Flores said that charges can be filed against the people who broke the rules and regulations for the protection of the stranded Whale shark under Fisheries Administrative Order 193 or the "Ban on the taking or catching, selling, purchasing and possessing, transporting and exporting of Whale Sharks and Manta Rays."

Section 4 states the penalty of the violation, which subjects offender to a fine of not less than P500 to not more than P5000 or imprisonment from six months to four years, or both fine and imprisonment depending on the discretion of the court.

However no legal action has yet been taken against the people involved in the Boljoon incident, who admitted they were ignorant of the Whale shark laws and have since apologised.

"The incident has really raised awareness, especially that it has been spread over the Internet. People now know what should have been done," Flores said.

Mayor of Boljoon, Teresita Celis, apologised for the incident and told the Inquirer News she is now pushing for stricter regulations to protect Whale sharks.