There have been many guppy societies over the years, but unfortunately most have closed down. However, one has been resurrected and become International, reports Dr David Ford.

The Fancy Guppies UK society holds several competitions throughout the year for the 'UK Guppy League' award. With no base, or funds for hiring halls, it holds each of these shows in other clubs’ venues.

This year these will be Open Shows at Sheffield, Corby, Barnsley and York. The most recent one was at York (actually a local village called Stockton on the Forest) on August 11, within the annual 'Friends of Yorkshire' Open Show.

There is also a 'Guppy weekend' organised every year in February which hosts the first league show of the season, and of course the European Championship show which is organised during the weekend of October 12 and which is also the final leg of the UK Guppy League. There will be 200 pairs of fancy guppies at this show with fish on display from all over Europe and beyond!

Back in the days of the FGA (Fancy Guppy Association) and similar groups within Livebearer Societies, standards were drawn up for the Breeds of Fancy Guppies, based on finnage shape. This attracted the European Guppy breeders who adopted the British standards and then maintained them when the British Societies collapsed.

The Germans and the Dutch were the most active and they formed this governing body for all the guppy clubs throughout Europe called the IKGH (Internationales Kuratorium Guppy Hochzucht) - this is Dutch and means 'International Board of Guppy Highbreeding'. The English interpretation of this is 'International Congress for Guppy High Breeding'.

The governing body then developed the guppy standards based upon the British standards to the 12 tail shapes that we see today. 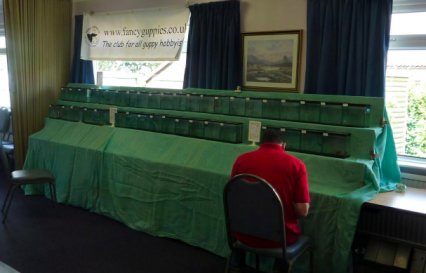 When the Fancy Guppy Society re-formed in the UK (the first Championship Show was awarded in 2006) the Club was affiliated to the European Group and adopted the IKGH standards - the picture above shows the entries at the Yorkshire Open Show, which are being judged to IKGH standards.

At York there were 40 entries and the Best in Show was a Broadtail (pictured at the top of the page) owned by the Chairman of the Fancy Guppies UK, Carl Stewart. In keeping with the strict standards of the Society, he bred and raised the winning fish himself.

You can find out more about the society and how to become a member on the Fancy Guppies UK website.