Snail lights up to deter predators Some marine snails glow to scare off predators, but few do it more effectively than Hinea brasiliana (which belong to a group of snails commonly known as clusterwinks).

This snail's remarkable capability to amplify and scatter light throughout its shell, an otherwise opaque object, has become the subject a study to be published in a forthcoming issue of the Proceedings of the Royal Society B: Biological Sciences.

In this study, authors Dimitri Deheyn and Nerida Wilson collected live snails from Australia and analysed the spectral properties of the bioluminescence in both snails from which the shells had been cut away, as well as from those with intact shells (although they had to drill holes in the shells to chemically stimulate the snails to glow).

They also analysed the shells for their light transmission and diffusion capacities. Lastly,they experimentally assessed the conditions under which the snails could be mechanically stimulated to glow by introducing other organisms (amphipods, prawns, poychaete worms and other snails) into the same covered petri dish where live, freshly collected snails had been placed, and recording the light production patterns produced by the snails.

The authors found that the shells were able to transmit 0.6% of blue-green light (the snails bioluminesce with a greenish light). Although this seems like a very small amount, it is unexpectedly high for such a relatively thick material (it is eight times higher than equivalent standard diffuser reference material).

The authors also found that the shell was able to amplify and diffuse the light in such a manner that blue-green light from a discrete source was propagated homogenously through the entire shell, generating an illuminated diffuse area more than 10 times greater in comparison to standard diffuser material. 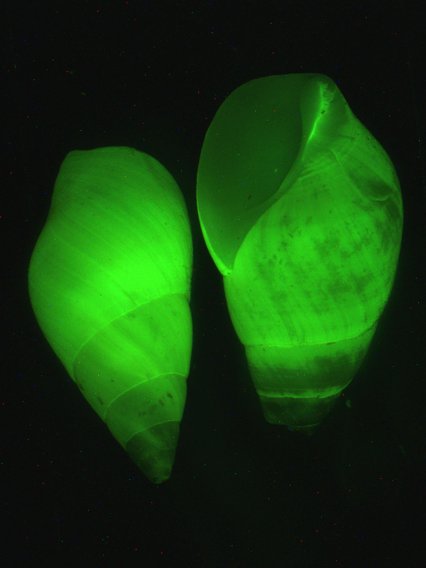 In the last set of experiments, the authors found that the snails produced a series of short intense bioluminescent flashes (which appears as a glow) when they come into physical contact with other organisms, with the flashes becoming more intense with increasing frequency and intensity of contact.

Based on the results of the last set of the experiments, the authors hypothesise that the diffuse green glow that the snail produces may be used to deter predators.

In the wild, snails of the family Planaxidae (of which Hinea is a member) often cluster together in high numbers in moist crevices or under rocks during low tide (hence their common name). The authors hypothesise that a large group of snails that flash when threatened would further deter predation, thus enhancing the ‘flash bulb’ effect that might temporarily blind nocturnal, visual predators.

For more information, see the paper: Deheyn, DD and NG Wilson (2011) Bioluminescent signals spatially amplified by wavelength-specific diffusion through the shell of a marine snail. Proceedings of the Royal Society B: Biological Sciences. DOI: 10.1098/rspb.2010.2203