Do you sell tropical or marine fish? Are you passionate about not stocking unsuitable species? If so, add your shop or company name to the list below.

The aim of the big fish campaign is to lessen the number of large tropical and marine fish species which have to be rehomed every year by public aquariums and zoos.

Formed by the public aquariums themselves, and supported by many industry experts and hobbyists, The Big Fish Campaign was forged through concern over the high number of large fish species which are sold and then later have to be rehomed when they have outgrown their owners' tanks.

The problem is that they are sold in shops at a small size, with juveniles being cheap, cute and can easily be housed in standard sized aquaria. 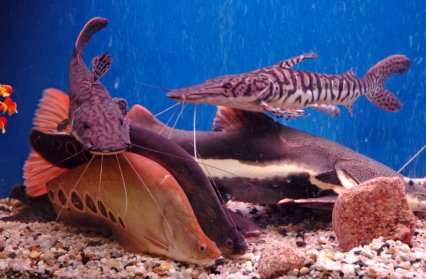 Years later, and when those cute little fish have grown in excess of two feet long, needing much larger aquaria, and costing their owners thousands in food, accommodation and tank running costs, the "easy" option for many is to either call a public aquarium and play the "I can't afford to keep it any more" game, or just literally to abandon it on their doorsteps.

With thousands of juveniles of the above species sold ever year, hundreds later turn up at public aquaria years later, many with signs of neglect, poor diet, poor water quality and cramped accommodation.

Where do they go? Either on display or out the back with all the other rehomed fish, causing even public aquaria problems with tank space, excess feeding bills and perhaps another decade or more of paid staff being responsible for their welfare.

So what do they want to do about it? Well, keeping large species of fish is not against the law in the UK, and noone from the campaign ever wants it to be. We love big fish, and if you have suitably large, long term accommodation, and suitably deep pockets, please carry on with what you've been doing. Large fish can make great pets after all, and many have individual chracters and display high levels of intelligence.

The problem however, and it is a big problem, is that only a tiny percentage of people who buy the above species in the first place will actually keep the fish for its entire life, which could be 20 years or more, and ensure that it has very large accommodation when it grows.

Firstly The Big Fish Campaign wishes to spread awareness, so that no unsuspecting would be fishkeepers end up with a fish that will outgrow them.

They are also asking for aquatic retailers to support the campaign by not selling the above species when they are small and cheap, to spread awareness to their customers, and ideally, not to order them in in the first place, either via wholesale or direct import channels.

We all know that a certain amount of the aquatic trade is dependent on the sale of these fish as part of their turnover, and through sales of food and huge tanks and equipment, but do spare a thought for those at the other end of that fishes life, and the fact that they are privately funded, and from a finite pot. 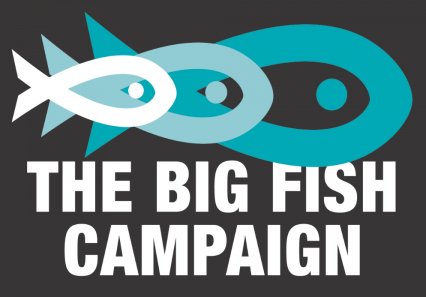 Sign up
If you represent an aquatic shop, a website, an aquatic business, a fish wholesaler, or are an importer, show your support by leaving your company name in the comments section below.

As the list of names builds up this page will then be quickly and easily accessable to everyone in the UK ornamental fish trade who shows their support.