A shark that glows in the dark keeps predators away using a 'lightsaber' on its back.

It lives at a depth of 200-1000m in the the Atlantic Ocean and Mediterranean Seam, and like many deep sea animals it glows in the dark (known as bioluminescence) with the aid of light-producing photophores in its stomach. This makes the shadow of the shark disappear to prey looking up from below — the sun's rays penetrate to a depth of 1000m and the light produced by the shark looks similar to that of the sun shining into the water. The prey just can't see the shark approaching.

But now scientists have discovered that this shark also has 'lightsaber-like' spines on its back, which illuminate the spine. 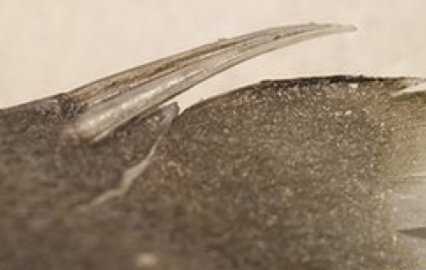 Shark biologist Dr Julien Claes, from the Catholic University of Louvain in Belgium says that the discovery was a real surprise in a species that's trying so hard to be invisible from below.

However, further research has revealed that the shark highlights the presence of its spines in this way as a warning to potential predators that they may be hurt if they attempt to eat it — and experiments have shown the light they emit can be seen from several metres away.

Dr Claes says it's unusual to find an animal that uses light as both camouflage and as an advertisement simultaneously.