The fight for the very future of seahorses is even taking place around our shores. Nicolette Craig explains how we can all play a part in helping to preserve them.

I defy anyone not to find seahorses beautiful. These fascinating creatures with their amazing reproductive biology capture the imagination. All the more sad then that they are increasingly under threat.

Trade in traditional Oriental medicines, aquarium fish, souvenirs and curios and even food, together with trawl net by-catch and habitat destruction are subjecting them to intense pressure.

In 2001 the total global consumption of seahorses was at least 25 million. Latest estimates indicate up to a 70% decline in numbers over the last decade.

Although they look amazingly exotic, we have two species of seahorses native to UK waters.

The Short-snouted seahorse (Hippocampus hippocampus) and the Spiny seahorse (H. guttulatus) were long assumed seasonal visitors, but a survey by the Seahorse Trust over the last 15 years has discovered they occupy large ranges of our coastline.

Neil Garrick-Maidment set up the Seahorse Trust and co-ordinates the survey with volunteer divers around the UK. He was instrumental in getting the seahorses protected under the 2008 Wildlife and Countryside Act after a six-year campaign. He also co-ordinates the UK-based BIAZA studbook for both species.

He told PFK: "When we started the UK-wide survey we expected to find seahorses just on the south coast. However, we have established populations right along the south and west coast and all the way up to the Shetlands."

Neil said: "I had never seen anything like it. We think between 30-40 individuals are there, of which around half appear almost continually pregnant males  — seahorses can mate within 24-48 hours of giving birth — so this is a very important breeding site."

Controversial site
Unfortunately, the site has provoked controversy. Earlier this year, Natural England, together with the Crown estate which owns the land, set up a no-anchor zone at Studland as the seahorses depend on the seagrass beds there.

This incredibly diverse habitat is damaged by scouring caused by chains and heavy weights used for mooring local and tourist boats. The plan now is to compare a voluntary no-anchor zone with a control area where boats are allowed to moor as normal.

Locals fear this step will become a 'naming and shaming' exercise with boats anchored there identified on the Internet. They also believe the seagrass and seahorses are thriving as they are and should be left alone — as nature intended.

Neil is also dubious about the efficacy of the no-anchor zone for a different reason. He said: "It would be far more effective to establish environmentally-friendly moorings which rely on screws and floats rather than chains. These allow the seagrass to grow right up to mooring and mean locals and seahorses can co-exist happily."

In the meantime, he, alongside Dr Ken Collins from the National Oceanographic Centre in Southampton, are taking detailed measurements of the seagrass and tagging individual seahorses to learn more about their behaviour and needs.

They point out that seagrass is important, not just as a seahorse breeding site but also because it absorbs carbon dioxide, protects against coastal erosion and is also a nursery for commercially valuable species such as bass. 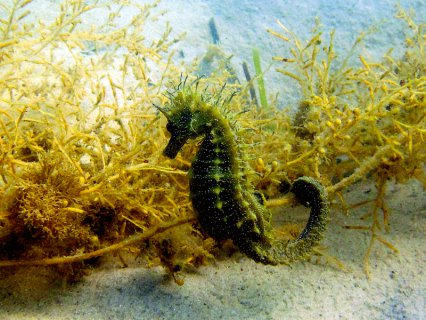 Project Seahorse
The use of the seahorse as an ambassador for conservation has also been used by Project Seahorse, a scheme set up by seahorse scientist Dr Amanda Vincent and Dr Heather Koldewey, the aquarium curator at ZSL’s London Zoo.

It was instrumental in getting the creature listed in Appendix II of CITES which restricts the trade of seahorses and also works with seahorses worldwide.

One of its biggest successes has been in the Philippines. Until 2004 it was one of the biggest exporters of seahorses and targeted fisheries and by-catch were huge threats. As a result of CITES listing, however, the Philippines government introduced a ban on all trade, including domestic, and passed laws to encourage all fishing communities to set up marine protected areas.

Heather said: "The average fishing family lives on just £600 per year and is dependent on seahorses and fish for its livelihood, so we couldn’t demand it simply stops fishing. Its catches tend to be of small-scale multi-species. Some are eaten and the rest sold for rice and other goods."

"We are lucky in that the locals have embraced the idea of setting up their own sanctuaries. They know that by protecting the seahorses and their area they are also protecting the fish — and by doing so the fish will return and that fishing around the sanctuaries will remain good. This is excellent as seahorses tend not to move around much.

"The local communities are very committed, even patrolling the areas to protect them from the threat of poachers."

So what does this mean for us? The aquarium trade accounts for hundreds of thousands of seahorses every year. This number is falling as captive-breds become more available from breeders in Hawaii, Vietnam, Sri Lanka and Australia. Captive-bred seahorses often prove to be a better aquarium choice as they are better fed and generally more resilient than wild-caught.

There is only one UK distributor of captive-breds and Simply Seahorses in Cheshire are distributors for Seahorse Australia which produces for public and domestic aquariums. Prices range from £45 for pipefish, up to £150.

Helen Gill, who set up Simply Seahorses, told PFK: "We started up with two species, H. kuda and H. reidi, but now import 1,000-2,000 seahorses every year of ten species. We import all our seahorses, but have bred H. capensis, H. abdominalis and H. zosterae and hope to ultimately set up our own captive breeding programme".

Think long and hard before you buy a seahorse. These require specialist knowledge, resources and time; often needing three or four feeds a day. Check the source of your purchase and only buy captive-bred stock as most species are now threatened in the wild.

Alter your diet — and help
One of the biggest threats to seahorses is the trawl for shrimp, so think again about your prawn cocktail or scampi! Buying only MSC-approved fish can be as important as your choice of fishkeeping.

Expert Q and A
Heather Koldewey is the curator at ZSL London Zoo’s aquarium and also co-founder and associate director of Project Seahorse.

Why did you first set up Project Seahorse?
I first became interested in seahorses when Amanda Vincent came to ZSL to talk about them. She mentioned the difficulty in identifying seahorses in the field, especially when they are used in traditional medicines. My background was in genetics and together we put together the first identification guide and genetic taxonomic tree for seahorses. Project Seahorse was a natural follow-up.

What are the key aims of Project Seahorse?
It was set up as an organisation committed to conservation and sustainable use of the world’s coastal marine ecosystems using seahorses as a focus. Using such a photogenic and enigmatic creature as our flagship image, we researched and brought about coastal management at scales ranging from community initiatives to international agreements.

What have you achieved so far?
We are proud of the fact that Project Seahorse put together the technical research needed to bring about the listing of all seahorses in Appendix II of the Convention on International Trade in Endangered Species in Wild Fauna and Flora (CITES).

This took ten years of research, but means we can already start to see a change in worldwide populations.

We have also set up several projects and studies around the world and also worked with practitioners of traditional Chinese medicines to seek to ensure a truly sustainable future for the seahorse.

What projects are in the pipeline?
We are working in the Philippines to protect at least 1% of their major coral reef system. There are already 30 marine protected areas compared to the UK’s paltry three, so we are already doing well.
In 2010 we will also be working together with divers, conservation groups and fishing communities worldwide to create a global database of seahorse hotspots — together with studies on their biology, ecology and the threats faced by them.