Scientists describe a bastard of a fish! Apparently the fish, which is a species of sweetlips, lives up to its scientific name. Apart from the obvious blue colour, it has a highly aggressive nature with males locking jaws and violently fighting. But it’s also very difficult to catch and land, and anglers in Australia, where the fish is found, have been referring to it by the name of 'Blue bastard' for this reason alone for decades.

Growing to around 90cm/3ft in length, the fish starts life as a striped juvenile (pictured below) before undergoing an amazing transformation into the bluish adult. 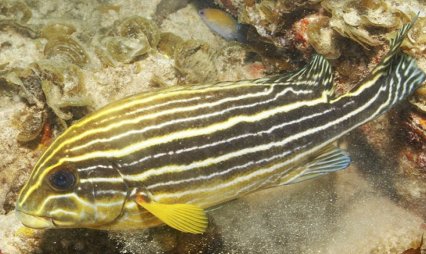 Jeff Johnson from Queensland Museum in Brisbane, Australia, who described the fish, said that the name is "an affectionate turn of phrase."

The fish lives in shallow, murky water in the north of Australia from Cape York on the tip of Queensland to Ningaloo reef off the coast of Western Australia. It feeds on small crustaceans.

The new species is described in the journal Zootaxa.