Romance is in the water for endangered fish ZSL London Zoo's Aquarium has become a pool of passion with two species of rare fish making the most of brand new pads.

Endangered Rainbow Characodon (pictured above) endemic to Mexico, and tiny critically endangered Corfu killifish, found only in Greece, have taken to their brand new tanks with gusto, leading to a bumper brood of 50 tiny fry.

Keepers believe the breeding success is down to the fish’s new tanks spicing up the waters. The tanks and conditioning unit, donated by Pets at Home New Malden, have provided the fish with the perfect conditions and inspired frisky feelings amongst the tenants.

With a whopping total of more than 100 new arrivals between the two species, the colourful fish broods will grow from their currently tiny length of less than 1cm to about 6cm long in adulthood.

Both of the freshwater species face extinction in the wild as their natural habitats are becoming increasingly threatened by pollution and drainage of waterways to accommodate for expanding human communities. They also face threats of predation from introduced species such as the mosquitofish. 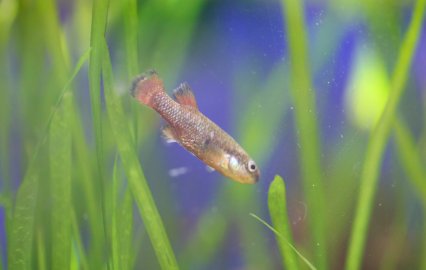 ZSL London Zoo Aquarist Alasdair Maltby said: "We’re thrilled that these fish have settled in to their new homes so quickly. To have over 100 fry born in such a quick period shows us just how happy and content they are — and are a great boost for the conservation breeding.

"These two species have a long way to go when it comes to fighting the tide of extinction; but the tiny new arrivals ensure we are one step closer to making small fry of that battle.

"Being able to help conserve these small but significant fish is fantastic and, by collaborating with other zoos and aquariums across the world as part of ZSL’s Fish Net project, it’s great that we’re able to work together for wildlife offering hope to species such as the Rainbow characodon and Corfu killifish."