Robotic fish is leader of the shoal In a meeting of technology and ecology, scientists have developed a robotic fish that can influence the behaviour of tank mates.

The so-called 'Robofish' not only managed to recruit three-spined sticklebacks to shoal with it, but also  influenced their movement patterns around a tank.

The 4.5cm Robofish was created by John Dyer, Dean Waters and Natalie Holt using a plaster mould of a stickleback painted with life-like markings.

Electromagnets and a pulley system underneath its tank allowed the Robofish to "swim" in pre-determined patterns - Jolyon Faria and colleagues programmed it so that it would lead a wild stickleback from a refuge and then complete a right-angled turn.

To assess whether wild sticklebacks were responding to Robofish, the researchers compared the time taken to leave the refuge with or without the Robofish present, and their positioning after Robofish made a sharp turn.

Overwhelmingly, the sticklebacks accepted Robofish as one of their own. With Robofish in their tank, individuals left the refuge in around two seconds, but when alone, took around four times longer to venture out. Groups of sticklebacks were less likely to respond to the Robofish though, and its presence had no effect on their time to leave the shelter. 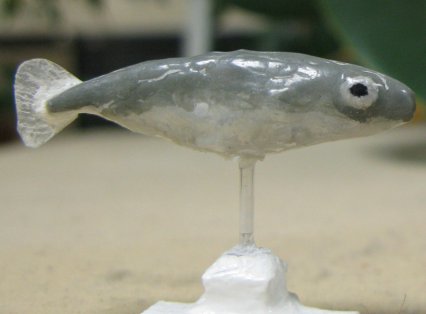 Robofish was also accepted as a leader fish to both single fish and groups of ten fish. After it performing a right-angle turn in the test tank, the majority of fish quickly followed its example and orientated themselves to it.

Researchers are not entirely sure why Robofish would have a more pronounced effect on individual vs groups of fish but think it may be due to Robofish appearing particularly brave: "Because Robofish moved faster, without stopping and tended to be at the front or edge of the shoal, the other fish saw it as bold and definite in its actions, which encouraged them to follow," Mr Faria explains.

Faria and colleagues are now hoping to further develop their robotic fishes and computational models to help discover more not just about about shoaling mechanisms but also wider applications of their discoveries: "Simulations of fish schools and flocking birds have been used to simulate animal groups in films, and ant behaviour has inspired solutions for logistic problems in companies."