A reward is being offered for information leading to the arrest of a vandal who damaged a 120cm/48in area of coral in Guam.

The damage was spotted by diving instructor Chris Gullick near Gun Beach at Tamuning on January 9 and he posted them onto his Facebook page.

So far anonymous donors have combined to offer a $650 reward for information leading to the arrest of the person responsible.

On one side, the word ‘Austin’ appears to gave been carved into the coral using a sharp object, while on the other side another word, less legible, but which could read ‘Squat5hit’ has been scored. 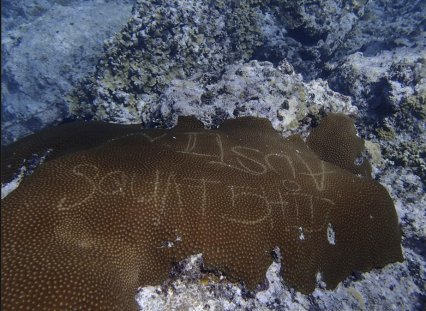 Dave Burdick, of the University of Guam Marine Lab, identified the coral as Diploastrea heliopora and added that although the tissue could grow back in a couple of weeks, scars will remain until a new skeleton forms. There is also the risk of the coral becoming infected as a result of the damage caused.