Remarkable? Daphnia? Who'd have thought it? It may be a popular live food supplement to our fishes diet, but the humble Daphnia pulex, or water flea, is a truly remarkable animal in the world of science.

It turns out that the near-microscopic crustacean is the animal with the most genes, about 31,000 in fact, and to put this into perspective, humans have about 23,000 genes.

Despite that, Daphnia is the only crustacean to date to have its genome sequenced; scientists did learn that Daphnia shares the most genes with humans over any other invertebrate genome sequenced so far.

The findings are part of a report by members of the Daphnia Genomics Consortium (CGB), and project leader John Colbourne states: "Daphnia's high gene number is largely because its genes are multiplying, by creating copies at a higher rate than other species." He goes on to say: "We estimate a rate that is three times greater than those of other invertebrates and 30 percent greater than that of humans."

More than one third of Daphnia’s genes are completely new to science, having not been documented in any other genome.

Daphnia has been the subject of scientific study for centuries due to its importance as an aquatic food, also for its responses to environmental stress – which include reproduction by cloning until such a time that environmental conditions improve enough to favour sexual reproduction. 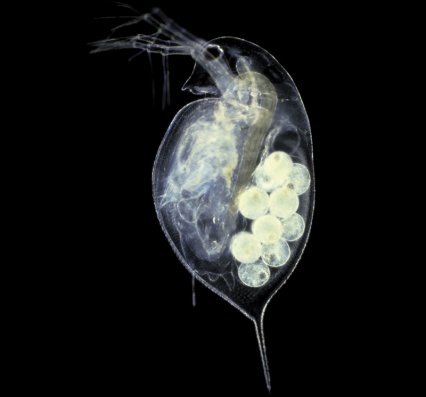 All of this means that Daphnia is emerging as a model organism for a new field of science known as Environmental Genomics, which hopes to better understand how the environment and genes interact. This has a practical purpose as developments from this field of science can be applied to our water resources, protecting human health from environmental pollutants.

"Until now, Daphnia has primarily been used as sentinel species for monitoring the integrity of aquatic ecosystems," said Joseph Shaw, co-author and IU School of Public and Environmental Affairs biologist. "But with many shared genes between Daphnia and humans, we will now also apply Daphnia as a surrogate model to address issues directly related to human health. This puts us in a position to begin integrating studies of environmental quality with research of human diseases."

Something to think about the next time you add that bag of live Daphnia into your tank for your fish to gobble up!