By popular demand Practical Fishkeeping has searched the archives and found the early eighties article "Clock on Tommy," on legendary fancy goldfish breeder Tommy Sutton, written by the then editor Nick Fletcher. 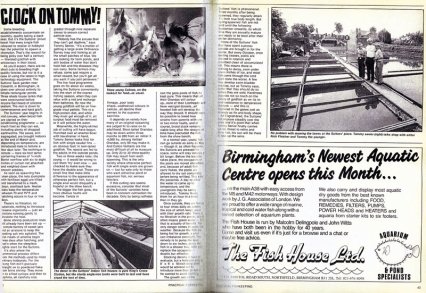 Springtime means all hands to the pumps for Britain's leading breeders of fancy goldfish, as Nick Fletcher discovered on one of their rare tea breaks...

It was poet and playwright T.S.Elliot who wrote in "The Wasteland" that: April is the cruelest month." And Britain's longest standing goldfish breeders would echo that sentiment heartily. 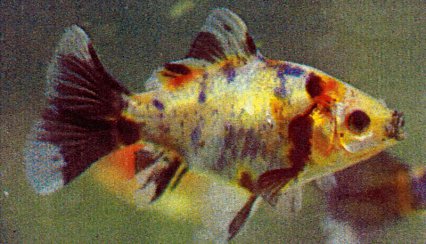 Every night, from mid-april onwards, their alarm clocks are set to go off at three hourly intervals. Then it's up in all weathers to pour brineshrimp, cyclops and daphnia down the hungry throats of fry - ensuring that their throats are never less than full.

That's one of Tommy Sutton's many secrets. At 76 he has over 60 years experience with fish of all kinds, and only now will he grudingly admit that his son (another Tommy) could probably manage the business himself - with a bit of advice thrown in here and there, naturally. 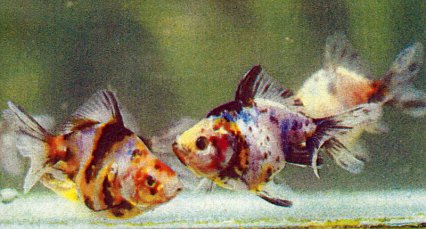 Some breeding establishments concentrate on quantity, quality taking a back seat. But its the Sutton's proud boast that every single fish released to retailer or hobbyist has the potential to spawn a champion. That's the reward for being picky over half a century - line bred goldfish with aristocracy in their blood.

As you'd expect, there are no short cuts to breeding high quality fancies, but nor is it a case of using the latest in high technology equipment. The Sutton's back garden near Coleshill, in Birmingham, is given over almost entirely to simple rectangular ponds. 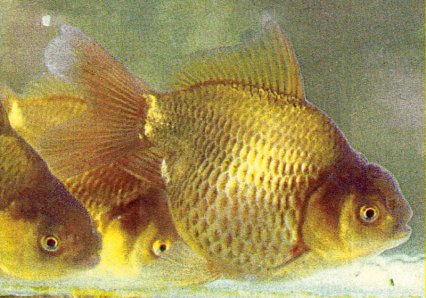 Three sheds house tanks that were constructed before anyone had heard of silicone sealant. The rest is down to commonsense and hard graft.

The Sutton's year begins in mid-January, when brood fish are started on their conditioning programme - as much food as they can eat, including plenty of chopped earthworms.

The sexes, still segregated, are brought indoors at the end of March, and depending on temperature, are introduced male to female a few days later. The technique is simple - bare six foot tanks containing frames of 3/4" Bartol overflow with six to eight inches of curtain net attached and weighted down with smooth pebbles. 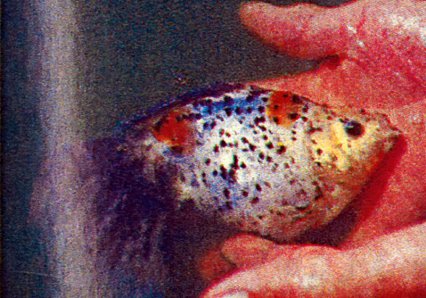 As soon as spawning has taken place, the nets (complete with fertilised eggs) are lifted and transferred to a fresh, clean sterilized tank. Heater stats keep the temperature between 70 and 75 and hatching occurs in four or five days.

There's no filtration, no substrate, nothing to introduce disease organisms - just an airstone running gently to circulate the heat. 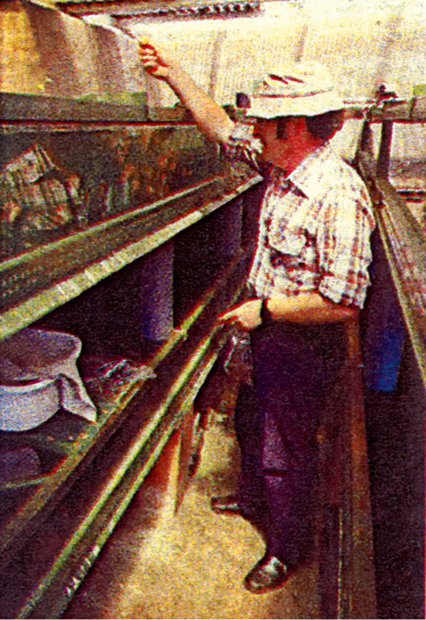 Brine shrimp production lines will have already been set up - a simple battery of sweet jars and an airstone to keep the cooking salt mix agitated. The first meals of Artemia begin three days after hatching, and that's when the sleepless nights start for the Suttons.

Its also where the commercial process differs from the methods used by most ordinary hobbyists. For the young fish don't graduate straight on to powdered flake from brine shrimp. They move on to sifted cyclops and then to daphnia, all carefully size graded through nine separate sieves to ensure correct particle size. 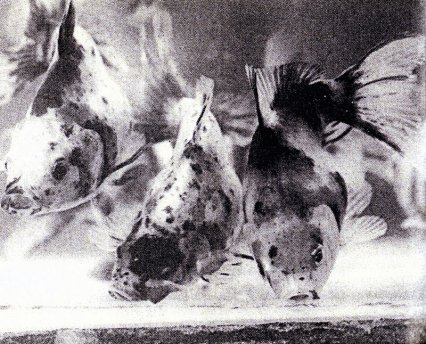 "Nobody has the excuse they can't get daphnia," says Tommy senior. "It's a matter of getting a large scale Ordinance Survey map and looking at all the small patches of blue. We are looking for farm ponds, and still bodies of water that don't hold fish and the diseases they can carry. Some farmers may refuse, some just require a small reward, but you'll get all you want if you just persevere."

The live food programme goes on for about six weeks, taking the Suttons conveniently into the start of the coarse fishing season, when they can relax with a rod and recharge their batteries. By now the young goldfish will be on on fine grade trout pellets. This is a high-protein diet, and while they must get enough of it, all surplus food must be removed or it will pollute the water. 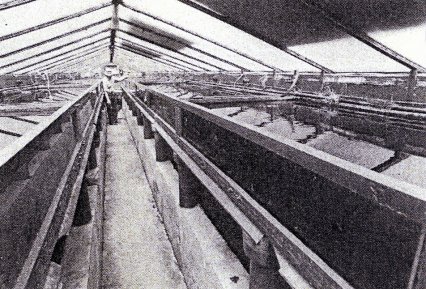 Meanwhile the highly skilled job of culling will have begun. Hunched over an enamel with tea strainer in hand, Tommy senior looks first for fish with single caudal fins - an obvious fault in twin tailed goldfish. The rejects are fed to the adults in the outside ponds.

The bigger the fish grow, the more obvious faults will become.Twists in finnage...poor body shape...washed out colours in calicos..all destine their owners to the supreme sacrifice.

It depends on variety how many of an original spawning are judged fit to raise on to adulthood. Short tailed orandas may be down within three months  to 260 from an initial 3-4000 fry. Among veiltail orandas, only 60 may make it. And calico veiltails are the most difficult of all to measure up.

Only 20-30 show quality fish may result from each spawning. This is the only variety where otherwise perfect fish with single anals are grown on - but for sale only to those who want attractive pond or aquarium fish - not serious fanciers.

If this culling rate seems excessive, consider that most of the Sutton's varieties have been in constant cultivation for decades. Only by being ruthless can the gene pools of fish be kept pure. This means that all their orandas will colour up, none of of their lionheads will have vestigial dorsal, and all hooded fish the way they should.

It should even be possible to breed true strains from parents with one or two minor faults, and of course, brood stock remains viable long after the ravages of time have precluded the fish from the show bench.

In a normal year, young fish can go outside as early as May - though if, as often happens the Suttons are pressed for space, some will stay indoors a bit longer. Before the transfer takes place, the occupants of the pools are moved elsewhere and, because all adult fish carry flukes, the pools are allowed to completely dry out before bring re-filled.

This kills the parasites. A day to allow the water to come up to temperature, and the youngsters may be safely introduced. Tommy floats them for an hour in a bowl, then they go in.

Once outside, they are fed up to four times daily on pellets the size of which keeps pace with their growth rate. There is no filtration on the ponds, which often means green water, but this is actually of benefit. The only danger comes in really hot weather.

Because the fish are being fed for growth, a pond can imbalance overnight. The remedy is to pump the level down to six inches, place the fish in a shower tray, refill and replace the occupants. Drastic but effective.

Stocking density is hard to evaluate, but a hobbyists with an 8'x6'x18" deep pond would be advised not to introduce more than 30 fish if he wanted to avoid stunting.

The growth rate of the Sutton's fish is phenomenal. Three months after being spawned they regularly attain 1 1/2" true body length. But spring spawned fish are not sold until the following September onwards, by which time they are sexually mature and ready to be bred after their winter dormancy. 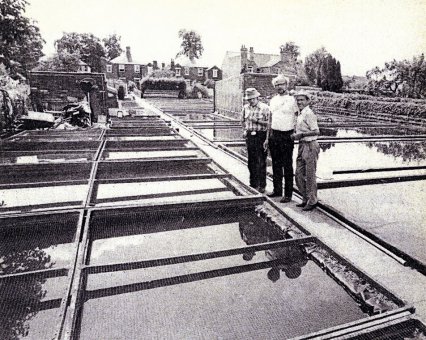 None of the Sutton's fish that have spent summer outside are brought in for winter. But every October, once feeding ceases, pools are drained in rotation and scrubbed clean of accumulated silt. This means there is nothing to decay, even under seven inches of ice, and most fish come through the cold spell none the worse. A few may develop swim bladder troubles but as Tommy says, better that they should do so before they are sold.

Hardiness depends not so much on the variety of goldfish as on its in bred resistance to temperature changes - and this is imprinted in the genes just as strongly as fin and body shape.

All english bred, the Sutton's fish improve steadily over the years and its good that when Tommy senior finally carries out his threat to retire and show fish, his son will be there to take up the reins.