The final results from a marine predator research programme have likened the North Pacific Ocean to the Serengeti.

The Census of Marine Life’s Tagging of Pacific Predators (TOPP) programme has found that there are two hot spots in the Northern Pacific which attract an array of marine predators in predictable seasonal patterns.

The paper published in Nature marks the culmination of 10 years of work involving 4,306 electronic tags and following the migrations and habitat preferences of 23 species.

The study found that the busiest areas for large predators such as whales, sharks, seals, seabirds, turtles and tunas are the ‘California Current’, which flows south along the US west coast, and the ‘North Pacific Transition Zone’, which connects the western and eastern Pacific about halfway between Hawaii and Alaska.

Project originators Barbara Block of Stanford University's Hopkins Marine Station and Daniel Costa, professor of ecology and evolutionary biology at the University of California said: "These are the oceanic areas where food is most abundant, and it's driven by high primary productivity at the base of the food." 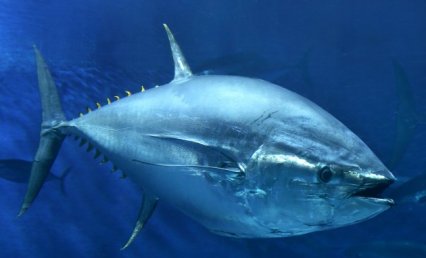 "It's been a bit like looking down on the African savannah and trying to figure out: Where are the watering holes that a zebra and a cheetah might use? Where are the fertile valleys? Where are the deserts that animals avoid, and the migratory corridors that animals such as wildebeest use to travel from place to place? We've come to a vast oceanic realm in the Pacific and answered these questions for animals as diverse as bluefin tuna, blue whales and leatherback sea turtles."

Dr Block continued: "Knowing where and when species overlap is valuable information for efforts to manage and protect critical species and ecosystems."

The results suggest water temperature is key to the seasonal migrations of many species. Other findings showed the surprising homing ability amongst many of the species.

Dr. Costa said:  "It is akin to a student from London studying in far-off Rome and returning home each summer at the same moment - but doing it all in the dark, without a map or compass, using only their internal sense of position and direction."