Orange 'goo' washes up in Alaska Experts are baffled by the appearance of what has been described as a neon orange 'goo' in the remote northwest village of Kivalina, Alaska.

The substance appeared in the harbour last week and began to wash ashore. Similar stuff was also reported in a river 150 miles away. Then it rained, and the same material was found on top of buckets used to collect drinking water and also on a town roof, which could suggest that whatever it is, is airborne.

It's thought that the goo could be a type of algae and samples have been sent to laboratories to find out just what it is.

Austin Swan went out into the lake to scoop up the goo. He told the Independent: "It was really light, a powdery look to it, and it was just floating on there, all bunched up together. It looked like it could blow away very easily."

Some of the material had a sheen to it, like it was oil, he said, "but I couldn't feel the oil at all, any texture at all".

When the material bunched up in the lagoon, it created 10 x 100' swaths of glimmering orange, Frances Douglas told an Associated Press reporter.

"When the wind came in, it narrowed them to a few feet wide. The colour was a bright neon orange. It pretty much covered the south end of the lagoon in streaks. Everybody was baffled." 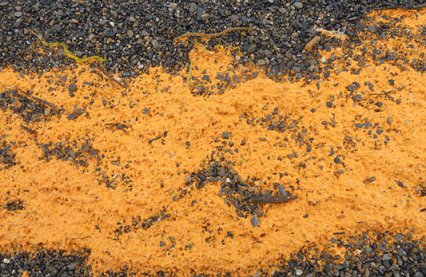 By Friday the substance had dissipated, leaving behind what looks like an orange powder that is still worrying the village's 347 residents who have been boiling their water and keeping children away until they know it's safe.