Old and new at Bradford show Bradford and District Aquarist Society held its traditional springtime Open Show and auction at the Bradford Academy on May 10, 2015.

The Open Show attracted 137 entries with wins by showers from the Bradford club and the Anabantoid Association of Great Britain, Castleford AS, Ashby AS, Otley AS, Ryedale AS, Workington AS, Sheaf Valley AS and the Ferrybridge Aquatic Show Team.

Held under YAAS (Yorkshire Association of Aquarist Societies) rules with YAAS Judges Trish Jones, Trevor Douglas and Edward Cheetham, the two major awards at this event are Best in Show and Best Exhibit (the first is any single fish, the second is pairs or shoals).

The Best in Show was a Betta splendens (pictured at the top of the page) by Mike Kirkham of AAGB, who won the same award with the same species in the same Bradford Show last year.

The Best Exhibit was a pair of Bunocephalus ladai by the Chairman of Castleford AS, Steve Grant, who also won the same award – with the same fish too – last year! 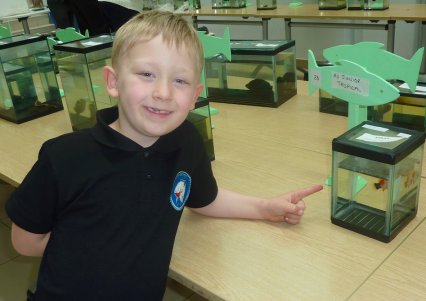 New to the event were the Junior Tropical and Coldwater awards. Six-year-old Ben Lee of Otley AS won both awards (he was brought to the show by Grandfather Ian Lee of Otley AS). Ben’s fish were a Platy Xiphophorus maculatus and a Shubunkin.

Another major win was a clean sweep by Sharon Hall (independent goldfish breeder) in the Fancy Goldfish Class, with a Calico Ranchu (first), and Ryukins (second and third).

The most Firsts were by Jim Haworth of Castleford AS.

All the winners in the 37 Classes received a certificate from Bradford DAS Secretary Anthony Fisher and some live fish food donated by sponsors Yorkshire Brine Shrimp.

At the auction, an audience of 80 aquarists bought many items over four hours. The auctioneer was Steve Jones (YAAS).