A crafty octopus taught this dolphin a lesson after it apparently tried to eat it.

The cephalopod obviously didn't fancy the idea, so it clung to the dolphin's belly, where it managed to attach itself to its genital slit.

The dolphin had to make several leaps in order to dislodge its uninvited guest, but later appeared to be none the worse for wear. 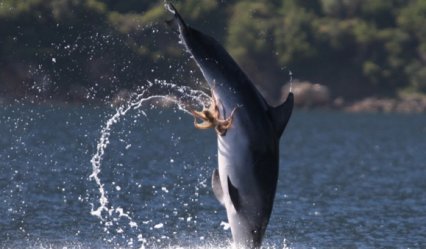 A team from the Ionian Dolphin Project, part of the Tethys Research Institute, was observing a group of four Bottlenose dolphins near the island of Kalamos, off the west coast of Greece when they witnessed one of them suddenly leaping out of the water with something dangling from its stomach. It wasn't until the researchers examined their photos later that they realised the object was actually an octopus.

Photographer Joan Gonzalvo told New Scientist that he thought perhaps the dolphin had tried to eat the octopus and the animal had lodged itself along the dolphin's genital slit as a means of escape.

He said that whales have been known to breach in a similar fashion in an effort to remove parasites and barnacles, but this was the first time he'd seen anything like this.