'Number one most dangerous alien species' found near Heathrow Native fish and other wildlife could be threatened by the discovery of a mussel in a reservoir near London's Heathrow Airport.

Quagga mussels have been described by the Wildfowl and Wetland Trust (WWT) as "the number one most dangerous alien species".

Their presence has been discovered for the first time in Wraysbury Reservoir, a popular sailing, fishing and scuba diving lake that’s also a protected area for wildlife.

The mussels are less than 5cm/2in long, but breed prolifically, with adults producing one million eggs per season. The larvae can drift downstream for up to 300km before forming new colonies.

The vast colonies which attach on to hard surfaces, can smother boat hulls, block pipes and potentially cause flooding. The mussels have been described by experts as "ecosystem engineers", due to their vast capacity to filter water, which upsets the natural balance throughout the food web. They eat some pollutants, but they turn it into concentrated toxic waste which can poison drinking water for people and wildlife. 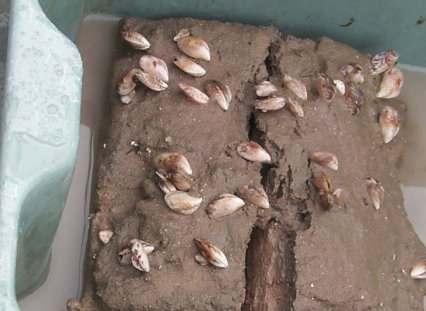 Jeff Knott, WWT's head of conservation policy, said the creatures are likely to indirectly cause "suffering and death for hundreds of thousands of native animals, fish and plants" and cost millions of pounds in tax and water bills to protect drinking water supplies.

The spread of the mussels is usually the result of human activity — adult mussels attach themselves to boats and the larvae can get into cooling systems and ballast tanks.

Originally from the Ukraine, the species has spread across Europe as well as the US. There is no effective way of completely removing their presence after they have become established.

A Defra spokesman said that invasive non-native species cost the economy at least £1.8 billion a year.

He added: "We will be working closely with interested parties and our agencies to reduce the risk of the Quagga mussel spreading any further. Users of our waterways can help with this by checking their equipment and keeping it clean and dry."

If you come across a suspected Quagga mussel, you should report it.