A fabulous new series of underwater sculptures has been unveiled in the collection of MUSA (Museo SubacuÃ¡tico de Arte) in the waters surrounding Cancun, Isla Mujeres and Punta Nizuc.

The project consists of hundreds of life-size sculptures, made using materials that will encourage the growth of corals in what was originally quite a barren area. This amazing MUSA underwater art attraction for scuba divers and snorkellers also eases the enormous pressure put upon the natural reefs in the area by tourists, by drawing them away.

The recent works by Jason deCaires Taylor bring his contribution to the project up to a total of 510 permanent sculptural works. They also mark for the time being his final addition to the project in Mexico as he relocates his studio back to Europe. The new pieces predominately use live transplanted coral and refracted light to create the narrative of the works and are set out in a linear tour of the Nizuc reef system which can be viewed by a glass sided semi-submersible.

The new works include: 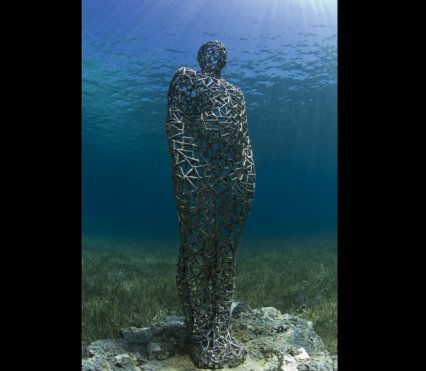 Vein Man
MUSA Collection. Cancun/Punta Nizuc, Depth 4m
Using a highly developed grade of marine stainless steel "Vein Man" is constructed to form a network of tubular highways for the calcareous structure of Fire coral to travel along. The internal void houses the coral whose Latin name 'Millepora' means a thousand pores and closely resembles human skin. It is also intended to be a space for juvenile fish species to take refuge. The figurative work references the transportation networks of the human body and the interconnection between the natural world and ourselves. 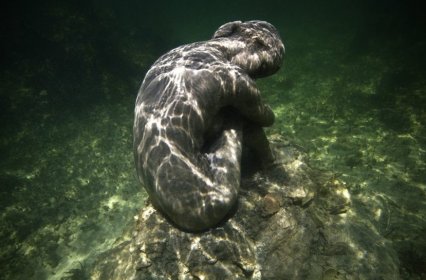 No Turning Back
MUSA Collection. Cancun/Punta Nizuc, Depth 1.2m
"No turning back" portrays a lone female form situated just below the sea’s surface easily visible for snorkelers and nestled within the reef system. Her curved back is designed to capture the flickering rays of overhead sunlight created by the undulating surface of the waves. The sadness portrayed in the piece references the recent statistics reporting how Caribbean reefs have seen losses of up to 80%.

Resurrection (pictured at the top of the page)
MUSA Collection. Cancun/Punta Nizuc, Depth 4m
Using live purple Gorgonian fan coral (Gorgonia flabellum), which had been displaced and rescued from the reef system after recent storm activity, the "Resurrection" represents a female-avian form emerging from the seabed. The winged armature houses specially designed clamps for fan coral and its orientation towards the currents maximises the coral’s potential to draw nutrients from the water column. In contrast to the "No turning back" piece it embodies the concept of rebirth and regeneration and the offering of hope that humans can affect change in a positive direction. 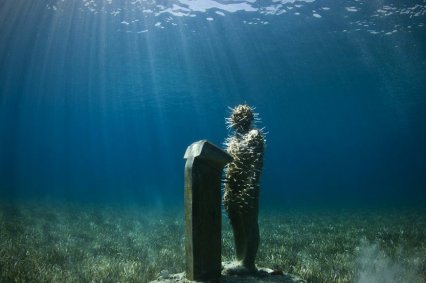 The Speaker
MUSA Collection. Cancun/Punta Nizuc, Depth 4m
A figure standing at a lectern, the piece is propagated with over 200 fragments of Acropora prolifera (see detail on the picture below), which is a hybrid species of Staghorn coral and Elkhorn Coral. 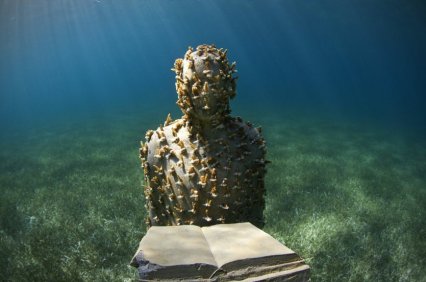 The piece is the counterpart to "The Listener" sculpture located nearby. 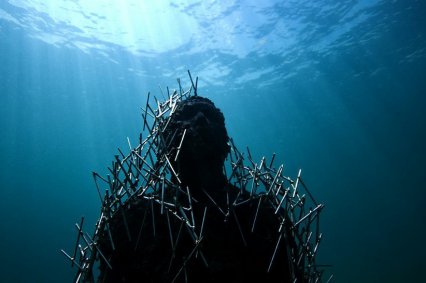 Self-Immolation
MUSA Collection. Cancun/Punta Nizuc, Depth 4m
Fixed to an arrangement of stainless steel spines, this sculpture has been extensively propagated with live Fire coral (Millepora alcicornis), a fast-growing, bright yellow species which, besides its appearance, gains its name from being able to inflict a painful burn-like sting to human skin. Using black pH-neutral marine cement, the piece depicts self-immolation and represents a dramatic, stark protest to the loss of natural marine habitats. Over time the fire is predicted to engulf the figure in a bright yellow patina.