A new species of cyprinid has been found in the Western Ghats, India.

Pethia striata was discovered by researchers from Ashoka Trust for Research in Ecology and the Environment (ATREE) in the Tunga River in the Kudremukh National Park, Karnataka.

The fish was found by V. M. Atkore, from the Bangalore-based Suri Sehgal Centre for Biodiversity and Conservation, who has been working in the Western Ghats for the past four years.

The most striking characteristics of the new species were the pattern of scales which form oblique bars and the black blotch just before the tail. "The ring is particularly apparent in both male and female and is distinct in this species," he said. 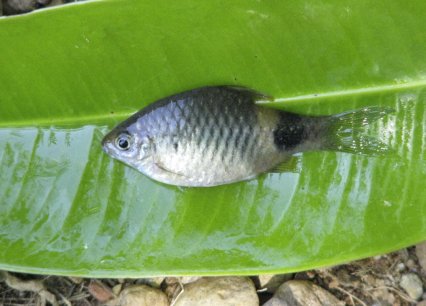 The male of the species measures 3-4cm in length and is red in colour, while the female (pcitured above) is grey.

The fish is currently known only from headwater-streams of the Tunga River basin, where it is found in shallow pools.

The Western Ghats is one of the biodiversity hotspots in India. Unfortunately freshwater habitats are coming under increasing pressure from human activities. "We still get such new discoveries in the less disturbed streams and not in polluted streams, and such discoveries are important to increase conservation efforts for this area, particularly such river stretches and streams," Atkore told LiveMint.

The discovery of the new species was published in the journal of the American Society of Ichthyologists and Herpetologists.