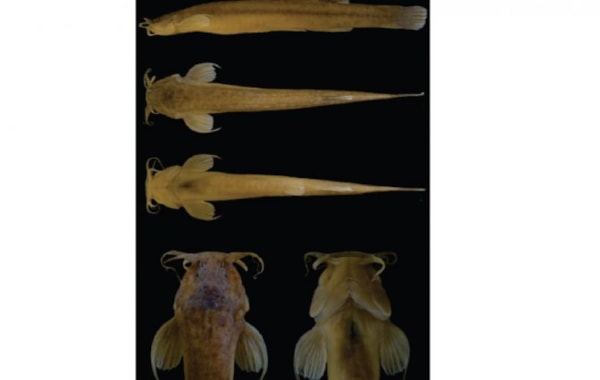 A new cave-dwelling catfish has been described from Brazil.

Ituglanis boticario is endemic to the Gruta da Tarimba, a cave in the state of Goias, in central Brazil. As is typical of cave-dwelling species, the catfish has little pigmentation. It reaches around 10cm/4in in length and is carnivorous in nature, feeding on insects and larvae.

The fish inhabit base level streams, with small depths (less than 0.80 cm) and no more than 1m width, with moderate water current. The bottom of the river is formed mainly by pebbles and silt. The microhabitats specificity exhibited by I. boticario makes it vulnerable to continuous cave usage (such as tourism, along with pollution and deforestation.

Scientists from the Federal University of Sao Carlos said in their paper: "The Tarimba cave system is one of the most important caves in Goías and it is the largest in the Mambaí region, extending for about 12 km (União Paulista de Espeleologia, pers. comm.). However, Mambaí is a poorly developed region, with native vegetation altered by deforestation, and there are no short- to medium-term conservation projects for the area.

They add: "The occurrence of a troglobitic species is considered sufficient to elevate the cave system to the higher relevance category predicted by the current Brazilian legislation. Besides the troglobitic I. boticario, the cave system is also inhabited by at least one species of characin (Astyanax aff. fasciatus), two species of bats and a diversity of troglobitic and non-troglobitic invertebrates (M.E. Bichuette, unpubl. data), representing an area of high diversity for subterranean fauna in Brazil. Based on this, we strongly recommend the creation of a conservation unit of higher category including at least all the Tarimba cave system and its areas of influence, in order to ensure the integral protection of the subterranean system and its biospeleological patrimony."

The project was financed by the Grupo Boticario Foundation for Nature Protection — and the new fish has been named Ituglanis boticario to honour this.