A new species of the genus Apistogramma has recently been described from Peru by an international team led by dwarf cichlid expert Uwe RÃ¶mer.

The species was first discovered in 2010 by local aquarium-trade fishermen in a small forest lake or cocha to the south of Iquitos, and given the provisional name Apistogramma sp. “Roterpunkt” (= red spot), but it is unclear whether it has actually been exported commercially for the aquarium hobby.

The species is characterised by a unique colour pattern in males (pictured above) consisting of a combination of creamy white to light grey central parts to the lips, plus bright red coloration at the pectoral base and on adjacent areas on the abdomen, gill covers, cheeks, and breast.

The name cinilabra refers to the unusual colour of the lips and means “ashy lips”. 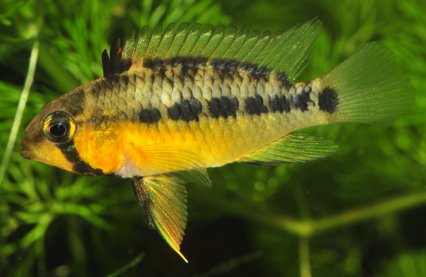 The species is unusual in other respects.  It is thought to be possibly a member of the A. regani lineage but the double spot on the caudal peduncle of adult females in breeding coloration doesn’t accord with this and is more characteristic of other groups found in the area.  Further research is in progress to try and resolve this question.

In addition the species appears to be restricted to just the type locality, a single small lake with an area of less than a hectare, surrounded by apparently primary forest and situated in a depression surrounded by hills. The lake appears to be completely isolated from other bodies of water and there are no streams flowing into or out of it.

Unlike in many Amazonian waters, the water level is apparently fairly constant with a seasonal variation of only around 20cm/8" – so there is no local flooding to connect it to other waters during the rainy period. It is shallow – up to 2 m – and very acid (pH 4.1) The bottom is covered with a thick layer of fallen leaves, twigs, branches, fallen trees, and fine brownish detritus, with patches of algae and a drifting unidentified grass- or moss-like plant in places. A few other fishes have been recorded there, but no other Apistos.

The new species has been kept and bred by Uwe Römer, and is reported to be rather difficult, reacting badly to any changes in water chemistry, perhaps because of the unusual stability of the water in the natural habitat (the annual flooding experienced in most Apisto habitats results in seasonal fluctuations in chemistry).  It is sexually dimorphic in size and coloration, with males, as is usual in the genus, being larger and more colourful. Like many Apistos it is a harem-breeder, with – unusually – both sexes particularly aggressive in defence of fry.

There is also a lot of variation in male coloration, not only mood-related, but also from male to male. The authors postulate that this polymorphism may be related to mate choice by females, a topic that has recently been the subject of some research.

Unfortunately the species is endangered in its natural habitat. The land and forest surrounding the only site where it has been found are currently being offered for sale for timber-felling.