The Maxspect Gyre is the world's first Gyre generator. With four years of research and development this patent pending technology is now available for aquarium use. The unit is capable of moving huge volumes of water at low wattage, and utilises cross flow rather than propeller driven impellers to move the water.

The Gyre generates a flow which is similar to the ocean current on the edge of a reef — a uniform body of water, which bounces off the opposite end of the aquarium, down to the sand bed and back to the pump. This results in there being no dead spots in the aquarium and as the flow is not focused, it makes coral placement far easier than when using conventional pumps/wave makers. 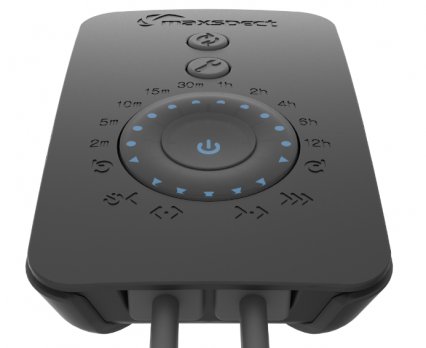 The Gyre is now available in a 50W model — the XF150 — which is capable of moving up to 20,000 lph on full power and comes complete with a controller (above), allowing you to simulate an array of different functions, such as surge mode to simulate wave motion and alternating Gyre. This mode will place the pump in a forward motion for a set period, then place the pump in reverse for your chosen timespan. There are also spare roll cages supplied with the units to create different flow within the aquarium, such as forward and reverse motion at the same time, with only one Gyre pump.

The Gyre is not limited to reef aquariums; tropical aquariums will be able to use a Gyre to create running water conditions within their aquarium. Maxspect says that the Gyre flow also does an incredible job of lifting fish waste and uneaten food from the bed of the aquarium, allowing filtration to work more efficiently.

A smaller XF130 model will be released prior to Christmas. This will be either a 30W or 35W model — the flow rating for this model is still not finalised. There will also be a larger XF170 model released in the first quarter of 2015 for those with bigger aquariums.

For more information or to find a stockist contact BCUK on 01507 600477 or visit www.maxspect.co.uk