Just days after the news was released about the discovery of huge animal communities surrounding volcanic vents in the Southern Ocean floor, it has been revealed that the scientists have given one of the creatures found an unusual nickname.

The new species of yeti crab which was found in prodigious number off the coast of south Georgia has been dubbed 'The Hoff' because of its hairy chest.

Usually yeti crabs are found in the Pacific Ocean and are recognised by the hairs/ setae, which cover their claws and limbs. These setae are used to cultivate the bacteria which they eat. The 'Hoff' crab – named after the American actor David Hasselhoff – is unusual in that its setae are actually on its undersides.

Project leader Professor Alex Rogers from Oxford University's Department of Zoology said: "Their nickname on the cruise ship was the 'Hasselhoff crab', which gives you some idea of what they look like. 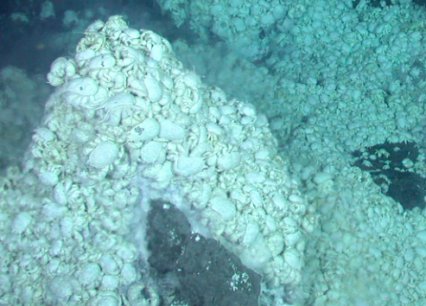 "The crab occurs in staggering densities. It is just incredible to see these animals literally lying in heaps around the diffuse flow of these vents. In places, they reached as many as 600 individuals per square metre."

The crab – a whole heap of them is shown above –  is yet to be formally named and it has not been revealed whether it will be keeping its unusual moniker.