Two new species and an entirely new genus of mormyrid have been described from the Gabon.

Preserved DNA from three specimens collected over a 13-year period were sequenced at Cornell University, revealing that although they were close relatives they didn’t belong within known genus in the mormyrid family of electric fish.

The researchers named the new genus Cryptomyrus, which comes from Greek words meaning 'hidden fish', since they are rare in natural history collections, with the two new species called Cryptomyrus ogoouensis and Cryptomyrus ona.

The first specimen was collected in 2001 by Lavoué in the Nyanga River in Gabon. Lavoué deposited the specimen in the National Museum of Natural History in Paris, but sent a photo and DNA sample to Sullivan. Then Yves Fermon, ichthyologist with the Aimara Association, collected another fish in Gabon’s Ngounié River and sent it to Sullivan in 2013. Finally, in 2014, during an expedition to Gabon’s Ogooué River, funded by Gabon’s science agency CENAREST and The Nature Conservancy, John Sullivan and colleagues caught a third fish. When he returned to Cornell, he struggled to identify his recent catch, but then remembered Lavoué’s specimen from 13 years earlier and started to put the pieces together.

"This is why we need natural history collections, to keep these specimens and their DNA samples in good condition, because it can take years or even decades to connect the dots," said lead author of the study, John Sullivan. 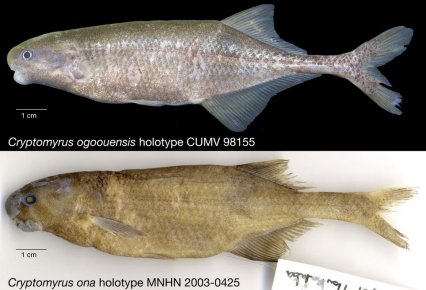 The authors also determined that the two fish from the Ngounié and Nyanga rivers were of the same species, which they named Cryptomyrus ona, after Gabonese environmental activist and Goldman Prize winner Marc Ona Essangui.

More than 200 species of mormyrid fish live in fresh waters across Africa. Cryptomyrus is the first new genus described within the Mormyridae family since 1977.

The discoveries are reported in the journal ZooKeys.