New events at this year's Festival of Fishkeeping This year's Festival of Fishkeeping in October will feature two new events.

The biggest event in the club calendar, the Festival of Fishkeeping takes place from October 26-28 at Sand Bay Leisure Resort, Weston-super-Mare and is open either to residents (two- or three-day weekend) or to day visitors on the Saturday and Sunday.

It offers the opportunity to see some stunning fish. It could be called the ‘Crufts of the fish world’, as it includes a number of fish shows including Discus, goldfish and Koi, as well as the British Open Final on the Saturday and ‘Masters’ Open Show on the Sunday. 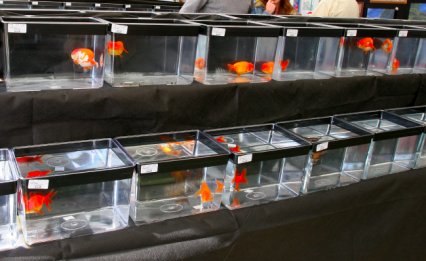 A new event for this year is the Ladies’ Individual Furnished Nano Aquarium. The furnished aquariums competition is a popular part of the show, and this year the FBAS has decided to include a ladies event. It says: "To reflect the growing popularity and interest in nano aquariums, we have, thanks to support from Aqua One, created a new competition…Most people will agree that furnishing an aquarium is an art in itself and we think the intricacies involved with furnishing an aquarium on a smaller scale will appeal to the ladies, which is why we are limiting entries in this competition to lady residents only."

Also, to celebrate the Diamond Jubilee, the FBAS Societies are being invited to nominate a single ‘Diamond Class’ fish from among their usual Show Class list. Winners and runners up will qualify for a ‘Diamond Final Round’ at this year’s Festival of Fishkeeping event.