Jeremy Gay is to be the new editor of Practical Fishkeeping.

Jeremy has been working on the magazine for the past five years, with the last three as Deputy editor.

His fishkeeping experience is incredible - he's been in the hobby since the age of five and this, combined with 11 years in the aquatic retail trade before joining PFK, means he's kept almost everything at some time or other. 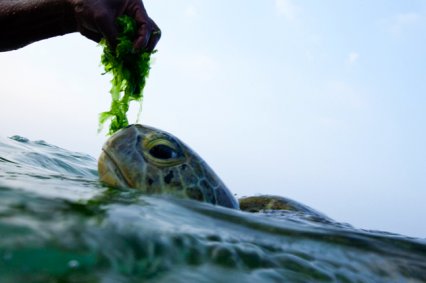 He's written three books, been on a fish expedition to the Amazon and travelled to Sri Lanka with the Marine Conservation Society, where he met and fed Green turtles (pictured above).

He's also starred in several fishkeeping videos – not to mention taking part in a 60-minute makeover on TV! He's a member of four fishkeeping clubs and regularly speaks at events.

He says: "Most people grew up wanting to be astronauts, footballers or millionaires. I just grew up wanting to edit Practical Fishkeeping, and after a roundabout route including 11 years in retail and five years in publishing, I did it, and I’m over the moon. Definitely a career and hobby high!"