An expedition to Millennium Atoll, a remote coral atoll in the Central Pacific, has uncovered an almost completely undisturbed underwater ecosystem that could serve as an important reference for restoration projects throughout the Pacific Ocean.

The survey findings, published recently in the journal PLoS One, describe an abundance of giant clams (Tridacna maxima) within the atoll lagoon, as well as large populations of blacktip reef sharks and Napoleon wrasse (Cheilinus undulatus).

The highly enclosed central lagoon measures 6 km by 0.5 km and is surrounded by a shallow perimeter reef, helping to protect the lagoon inhabitants from predation. It is likely that the lagoon and its network of reefs acts as an important nursery area for juvenile fish, including threatened species such as the endangered Napoleon wrasse (pictured below). 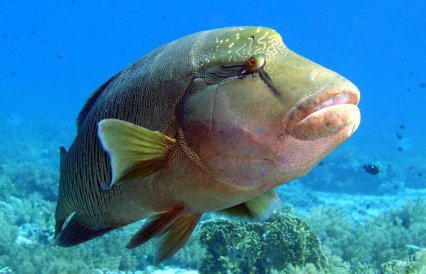 Coral cover in the lagoon exceeded 62% of the benthos and was found to be dominated by Acropora, with some colonies exceeding 3m in diameter. Corals from the genera Montipora, Fungia, Pavona and Leptastrea were the next most abundant.

A total of 89 fish species were recorded in the lagoon, with the Three-striped humbug damselfish (Dascyllus aruanus) being most common. Interestingly, macroalgal cover was extremely low (<1%), probably owing to the dense coral coverage and an abundance of herbivorous fish.

In addition to gardens of giant clams, the benthic invertebrate community was found to consist of an abundance of sea cucumbers and other filter feeders, almost certainly contributing to the high clarity of the lagoon water.

The expedition findings highlight the importance of protecting the atoll, which belongs to the Republic of Kiribati and is a member of the Southern Line Islands chain. Although relatively abundant at present, the sharks, clams, sea turtles, lobsters and Napoleon wrasse of Millennium Atoll are vulnerable to exploitation by fisheries; therefore, protecting the atoll and regulating any fishing in the area is crucial for the preservation of this unusually pristine ecosystem.