The 3rd annual Betta Show was held at the Rockingham Centre in Hoyland Common, Barnsley on Sunday, June 21 2015.

Originally, the meeting of Betta fishkeepers was known as the DJAY Betta Only Show (spin-off from the Yorkshire Association of Aquarist Societies) and was for local aquarists.

After a dramatic growth in numbers at the second year, the 2015 one has become the 'National Betta Show' with a committee of top Yorkshire aquarists and sponsorship by Ocean Nutrition and ZooMed.

The NBS was advertised as a day-long Betta-only show with trade Stands, refreshments, raffles, auction (of Bettas) and 200-plus displays of Bettas.

Visitors were able to view fish from all over the UK, but also from France, Germany and Thailand.

The same venue and date was used for another leg in the UKFGL (Fancy Guppy League - UK group). Hence, in the show room there were also 42 entries of Fancy Guppies (this is the 6th competition, the 7th will be held at the YAAS OS at Stockton on the Forest, York on August 16 and the grand final at Nasbey Hotel, Kettering, over the weekend of October 10–11. These aquarists really are international – their Shows are world-wide. 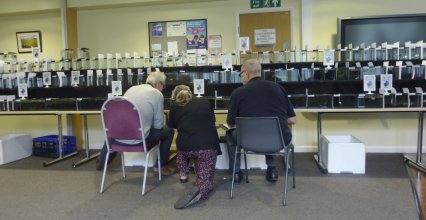 The Bettas were judged to YAAS standards by their A Class Judges, Trish Jones, Mick Price and Trevor Jones in the 17 Classes for Single Male, Single Female, Matched Pairs and Breeders groups. Seen here, busy with ruler and magnifier.

The FGL judges were Tina Smith, Stan Collinge and Henry Smith who had to assess 12 different breeds of Guppies (based on tail shape but also 29 colour combinations). This was a technical competition with results added digitally to the National Data Base, but the highest pointed Guppy at this Show was a Delta Tail Albino Blue by Henry Smith UKFGL.

Meanwhile the Best in Show of the Bettas was a 'Big White' by Mike Kirkham (member of NBS Committee). 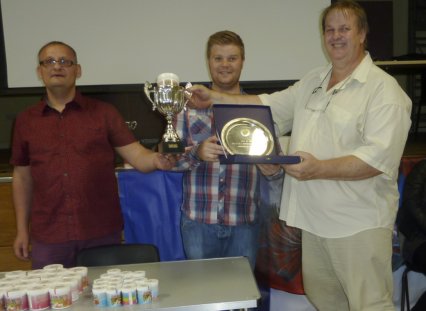 Mike received his award from other NBL Committee men, Jamie Horne and Ben Nichols. Mike also won other awards for his fish including Best Male and several Firsts.

One of the special prizes was the Peoples' Choice Award. When the Auction ended, the Betta Judges retired temporarily and visitors invaded the Show Room and placed votes for their choice of Best Betta in a sealed box. Their choice turned out to be a Wild Betta, not the brilliantly coloured breeders' specimens....

The Auction saw many good specimens sold for £3 each!

Here are some of the Firsts.... 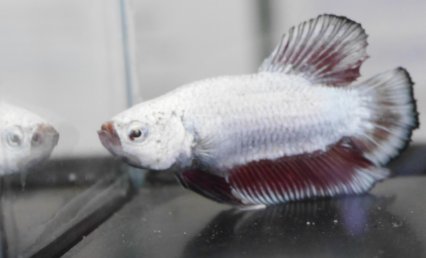 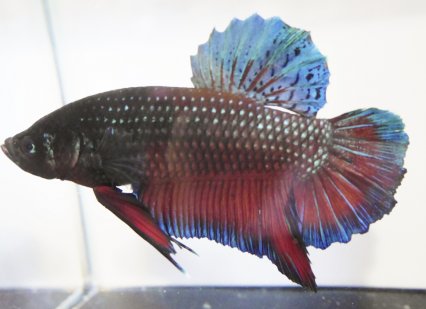