These 'mystery circles', which appear on the seabed off the coast of Amami-Oshima island in subtropical Japan, have been baffling divers for decades - but now researchers have found out not only what makes them, but why.

A team led by Hiroshi Kawase of the Natural History Museum and Institute Chiba discovered the culprit was a small male puffer fish measuring around 12cm/4.75" in length, which spent a week or more constructing these geometric circular structures 20-30m below the surface in order to attract a mate.

The puffer is thought to be a new species of the genus Torquigener.

After spawning the male stays within the circular structure for around six days to care for the eggs, although he doesn't maintain the area during this period and the structure eventually begins to disappear, flattening out due to the water currents and being covered by coarser sand particles.

Once the eggs hatch, the male leaves the nest site, before returning to the area to start the cycle again. However, the team found that the male never returns to an old nest site, instead constructing a new structure at a different site. The construction of each nest site was found to take 7-9 days. 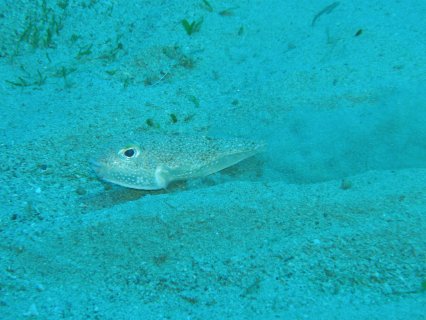