Something big is apparently stalking geese in the River Lea, six years after it 'disappeared'.

Back in 2005 there were several incidents of large birds being pulled underwater from the surface.

It was thought at the time that a large turtle or giant pike might be the culprit. Some people even speculated that a crocodile might have been released into the river or nearby waterway after Lea Rivers Trust staff reported seeing a Canada goose being dragged beneath the surface on the Old River Lea alongside Hackney Marshes and several large holes were found burrowed into the river bank. Otters were dismissed as a possible explanation back then because they don't inhabit the local area and don't normally attack geese. 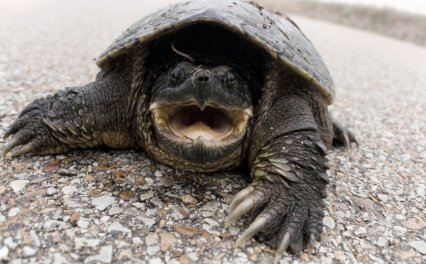 But before the mystery could be solved, the monster suddenly vanished.

Now the goose-eating predator seems to have returned and whatever it is, it's big. Mike Wells, who lives on a barge on the River Lea in East London told Express.co.uk: "We were just passing the time of day looking at a Canada goose 30 yards away, but then it just suddenly disappeared.

"It went down vertically. There wasn’t any hesitation, it went straight down. It didn’t come back up. My friend and I looked at each other slack-jawed.

"A Canada goose is not a small bird. They weigh about 16lb, so whatever took it was also large."

Mr Wells is hoping that the Environment Agency will investigate.