This squid has always got a smile on its face! The skin pigmentation of this little deep water squid gives it a huge grin, while the tentacles seem to form a mass of curly 'hair', combining to give it an almost cartoon appearance.

The Piglet squid, Helicocranchia pfefferi, is roughly the size of a small avocado, and is common in the deep water of virtually all oceans, living at depths of around 100m/320ft.

Its common name comes from its habit of filling up with water and the unique location of its syphon, with a wild-looking tuft of eight arms and two tentacles. 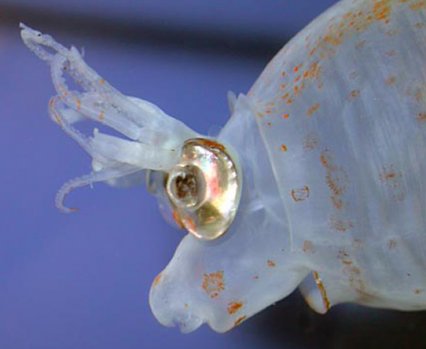 Its body is almost totally clear so that it reveals the dark-coloured internal organs.  The piglet squid is a sluggish swimmer with ammonium ions in its body fluid that helps keep it bouyant.

A large light-producing organ (photophore) is located beneath each of its large eyes. This specimen was collected by the Cabrillo Marine Aquarium.

The Piglet squid is one of the bizarre creatures from the deep sea to feature in the video below, from the 10-year Census of Marine Life.