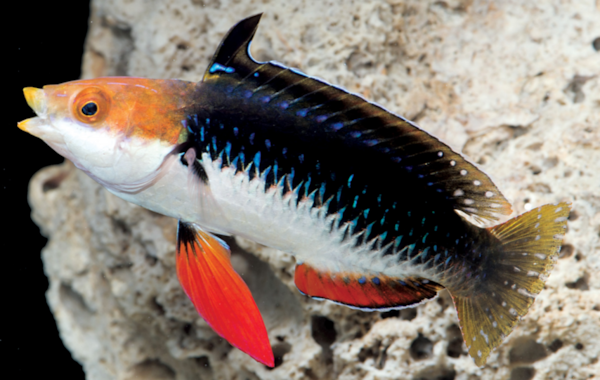 A gorgeous new species of fairy wrasse has been described from the Timor Sea, in northern Australia.

Cirrhilabrus hygroxerus is currently known only from a single reef area in the eastern
Timor Sea. It was collected and observed in depths of about 18–37m in habitats with sloping rubble bottoms and scattered outcrops of rock or coral.

The male reaches around 5.4cm/2.2in, the female slightly smaller.

The species is named hygroxerus (from Greek hygros, meaning wet, and xeros, meaning dry), with reference to the monsoonal cycle of wet and dry seasons of northern tropical Australia. The name is also intended as an acknowledgment of Monsoon Aquatics, the aquarium fish company that supplied all the type specimens for the study.

Cirrhilabrus hygroxerus is described by Gerald Allen and Michael Hammer in the Journal of the Ocean Science Foundation.