Cichlid expert Dr Ad Konings reveals his passion for both water and a plant that survives with very little of it.

How did you first get involved with cichlids?

When the first Neolamprologus brichardi arrived in the Netherlands I bought four and killed them overnight when I introduced them to my Amazon community tank! The next four ended up in a separate tank and I’ve been happy ever since.

What’s the most unusual/difficult fish you have kept?

When the first Gnathochromis permaxillaris came to the Netherlands, I kept two adults together, but they never fought nor spawned.

The most difficult to breed is the blue southern variant of Neolamprologus sexfasciatus. I kept an adult pair for more than six years in a community aquarium and they never spawned. I have bred the so-called golden N. sexfasciatus several times but I know of no successful aquarium breeding of the blue form.

What are you into at the moment?

With Jay Stauffer’s lab team at Pennstate University I’m working on descriptions of Malawi cichlids. My wife Gertrud measured many Melanochromis two years ago and described three new species in that group.

We are also working on several new Petrotilapia species and two new Mylochromis.

Do you have other interests?

Cichlids are my passion, but cacti are my hobby and Gertrud and I have just published our first book on the cacti of Texas in their natural habitat.

Cichlids are usually easy because most are territorial and return to you. My longest wait was for an irregularly coloured Tropheus moorii at Kantalamba, Tanzania where I got my shot only after some 70 minutes!

What’s the most fascinating fish you have come across?

The scale-eater Plecodus straeleni of Lake Tanganyika imitates the colour pattern of Cyphotilapia frontosa — not to eat scales from that species but to confuse other cichlid species into thinking that it is a peaceful Frontosa while closing in on its quarry.

What’s your favourite part of the world?

Lake Malawi is my paradise on earth: crystal clear water with extremely colourful fish in sufficient numbers and diversity to boggle anyone’s mind. In the last 30 years I have made between 35 and 40 trips to Malawi and I still have a long list of fish to see.

It’s said that we never stop learning. What’s the most recent thing fish have taught you?

In the lab of Tom Kocher it was recently discovered that the gene for the OB colour morph in mbuna is tightly linked to a dominant female sex determination gene, so that only females get the OB pattern. Such coloration is no good for males because they lose the species specific coloration and females may not recognise such a male as a potential mate.

Good genes, the OB pattern camouflaging the female to avoid predators, that cause a sexual conflict can only survive when they are, or become, linked to a dominant sex determiner for which the

It is even speculated that such new genes can even force nearby genes on the chromosome to become such sex determiners, depending on how beneficial a new mutation would be. 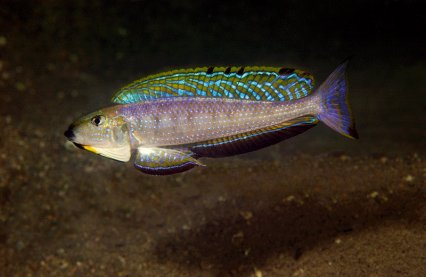 If recommending just one cichlid species for looks/behaviour what would it be?

Enantiopus melanogenys, the Dream cichlid (pictured above). It is best kept in a species tank with lots of sand and several males. When there is daylight directly on the tank you can see the males showing spectacular colours when they contest the boundaries of each other’s territory.