Meet Elvis, the skate with a 'quiff' This unusual Thornback skate with an extra fin was landed recently by fishermen in the Solent, and is soon to go on display at a public aquarium.

Realising the rarity of the catch, Stephen Stimson, the skipper of the fishing boat 'No More', contacted Portsmouth Blue Reef Aquarium.

Staff there have nicknamed the skate Elvis, because the fin resembles a quiff.

Natural History Museum fish curator, James Maclaine, was brought in to take a look at the extra appendage to see if he could identify it, as its position and shape made aquarium staff wonder whether it might be a dorsal fin — maybe some kind of genetic throwback to a shark, to which skates are related.

"Mutated skates do turn up from time to time, sometimes with fin anomalies that make them heart-shaped, but we still have never seen anything quite like this one before," he said.

"The general consensus is that it’s a mutation, and probably more likely an out of place extra pelvic fin rather than a new dorsal fin." 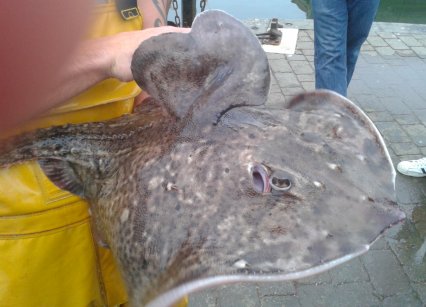 Despite the bizarre mutation, Elvis appears to be in the best of health, so it obviously hasn't hindered him in any way.

He is currently in quarantine at Portsmouth Blue Reef aquarium, but he will eventually go on public display in an open-topped tank.

The Thornback (Raja clavata) is the most common skate in British waters and can grow up to 1.2 m in length. The species gets its name from the spines which cover its upper body.