The genus Hypoptopoma GÃ¼nther, 1868 is a long-known group of small (10.5cm/4.25in maximum), peaceful loricariid catfishes, considered well overdue for the revision that has now taken place.

They are herbivorous fishes with interesting breeding behaviour, in that the male guards the eggs and larvae until the free-swimming stage.
Unfortunately they are not seen as often in the hobby as they deserve, especially now that there are numerous more brightly coloured 'plecs' available.
Hypoptopoma are found throughout most of South America east of the Andes, from the tropical Guianas south to temperate climes in Argentina, although they appear to be absent from the Uruguay and coastal drainages in south-western Brazil. 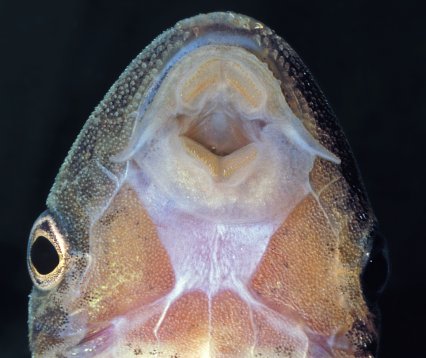 They are characterised by a very flattened head and anterior body, and eyes that are positioned more laterally than in most suckermouths. It is thought this may enable them to see what is happening below them as well as above when they are clinging to off-the-bottom substrates such as plant leaves and twigs.  Most plecos attach to larger objects so there is no danger likely from underneath them.
Identification of these catfishes has long been a problem in the hobby, and unfortunately the new revision does little to remedy this as it includes no photos of living fishes, and details of tail markings and drawings of the belly and breast armour – features important for live identification – are given for only some of the species.
In addition, although the authors have studied a huge amount of preserved material stored in museums, and in so doing discovered no less than seven species previously unknown to science, they have not included a number of still undescribed species that have been exported from South America for the aquarium trade. This reflects the gap that still exists between science and the hobby, despite attempts by some participants on both sides to bridge it. 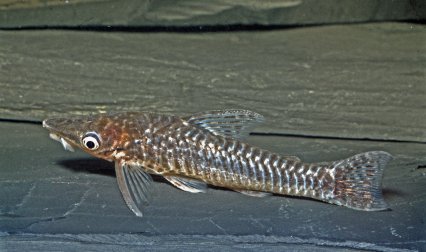 The newly described species are Hypoptopoma baileyi, H. bianale, H. brevirostratum, H. elongatum,  H. incognitum, H. machadoi (pictured above), and H. muzuspi.
In addition some synonymisation has taken place (e.g. H. guentheri is now a synonym of H. inexpectatum), and the genus Nannoptopoma Schaeffer 1996, with the two dwarf species spectabile and sternoptychum, has been 'lumped' with Hypoptopoma. The result is a total of 15 described species currently valid.
Despite its inadequacy from a immediate hobby viewpoint, this revision does provide an up-to-date reference work which will hopefully enable loricariid experts in the hobby to match at least some of the live fishes available with scientific descriptions.
This in turn will permit the correct names to be applied, and available ecological and geographical information to be correlated with the species, making for less confusion and improved aquarium care.
For further information see:  Aquino, A.E. & Schaefer, S.A. (2010): Systematics of the Genus Hypoptopoma Günther, 1868 (Siluriformes, Loricariidae). Bulletin of the American Museum of Natural History, 336: 1-110.