Looks aren't everything, as Igor proves! Igor the Pacu may not be the prettiest fish around, but that's not stopped him being a big hit with visitors at his new home.

He was originally bought as a tidder many years ago by the owners of a U.S. restaurant for their display aquarium. But he grew large very quickly, and was eventually taken back to the shop.

Unfortunately, he had a rather strange appearance.

Charlie Holland, the retired owner the pet shop Fins, Fur and Feathers in Boca Raton, Florida reckoned the Pacu's unusual looks had come about because he "used to spook and run into the end of his 10' long tank", the battering distorting his face. However, other experts think the deformity is natural. 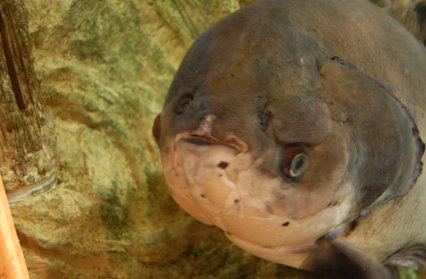 Unfortunately Charlie didn't have a tank large enough to put him in at the shop and he knew there was little chance of selling him on. But he hadn't the heart to kill him, so he contacted the authorities to see if they could help.

That was back in 1976. Igor, as he has since been christened, was re-homed at the Florida Fish and Wildlife Commission Non-Native Research lab, where he was a resident for 37 years.

Until recently the lab adopted many unwanted fish, its aim being to provide strategies to protect native fish and their habitats from non-native species like the Pacu.

FWC biologists had become rather attached to him, but unfortunately the lab facility closed at the end of April and once again Igor was looking for somewhere to live.

A potential new home at South Florida Science Museum turned out to be too small for the 75cm/30" Pacu, which now weighs in at 27 lb, but luckily a permanent home has been found at the Loxahatchee River Center in Jupiter, Florida (below). 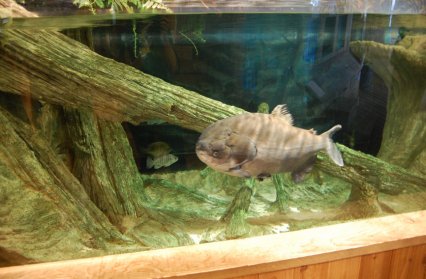 And despite his unusual looks, he's turned out to be a huge favourite (literally!) with visitors.