A display of piranha got some new surroundings last week as their tank was drained and redecorated by some keen aquatic plant companies.

PlantedTanks, Aquadip and newly set up Cape Aquatics took on the rescape, which eventually took a team of nine individuals over one week to create.

The existing Piranha tank holds over 15,000 litres of water when filled, a volume equivalent to 500 30 litre BiOrbs. It's four metres long by 3.15 metres wide by 1.2 metres tall and is viewable on three sides. 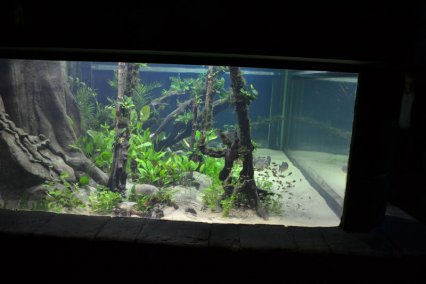 Not a biotope
The original design brief was to create a biotopically correct aquascape for the piranha species residing in the tank, using both the right fish and plants that occur with them in the wild.

The Rio Sucuri in Brazil was selected and research began into the possibilities of stocking fish and plants which originate from there, only further on into the project the biotopically correct plant scheme was replaced with one including plants from other continents as well.

Over 15000 individual plants were said to be used, and the plants were grown on separately in Aquadip's dutch plant nursery to ensure large size. The display is lit by 8 x 250 watt metal halides. 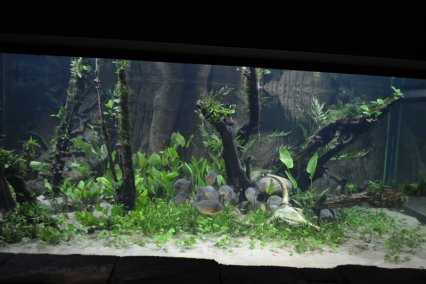 Will the extra recommended fish survive the piranha, and the plants survive one hungry L191 and 100 Otos? When presented with the original brief PFK noted several issues, like the tank being part of a huge centralised system which may make feeding the plants and fighting off nuisance algae a problem. We think the real test will be how the tank looks in 6 months or even 12 months time. It's then that the overhaul can really be deemed a success or failure.

It's big, but is it the biggest?
According to the sign on the tank, it claims to be the largest display of its kind in Europe and the second largest in the world. After it's completion PlantedTank's proprietor, Tony Newsom-Virr, rang PFK's editor and declared it the largest planted tank in the world.

"It is certainly the largest ‘aquascaped’ tank in Europe;"  a spokesperson for London Sea Life added. "Kew Gardens have a very large lily pad display but it is not strategically or professionally planted like ours and is open topped and lit with natural light…it is more like an indoor pond really!"

"We also believe it to be the second largest of its kind in the world, second only to one in Japan. The display itself is around 16,400 litres."

We at PFK have visited and featured some truly mammoth private and public planted aquascaped projects provided by Green Chapter in Singapore, some up to 40,000 litres, so would advise caution when making such size claims!

It is a huge tank though, and we welcome the small fish, large planted tank philosophy being adopted more and more over the large tank, equally large fish tanks, where it is hard even then to provide enough room, stimulation and conditions more like those in the wild. 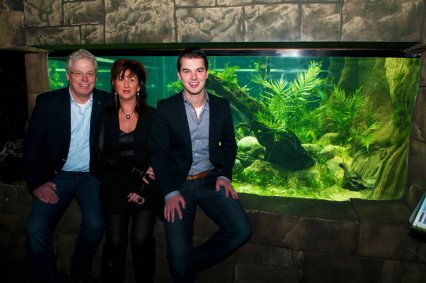 So come on 'scapers, leave a comment below and let us know what you think of the tank make over, the hardscape and planting, and the plant and fish species used. And if you have a larger planted tank than this let us know as we may just have to pay you a visit!